This is something very special— it's probably classical music to anyone well versed in New Orleans music, and anyone in the sampling world, but I only heard it for the first time recently: James Black playing Hook And Sling, by Eddie Bo. It's an extended funk jam taking up both sides of a 45 rpm single, and the drumming on it is something else— very much in the Zigaboo Modeliste zone, and roughly contemporaneous with the early Meters stuff we know and love, though Black was a little older. 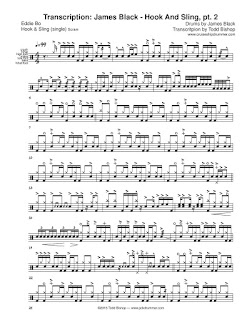 The record is one continuous recorded track split in two, and they chose a very strange spot to split it— take a look at the first measure. There's quite a bit of wiggle room in the hihat and cymbal parts; someone's playing some tambourine, and it obscures it to some extent. There's also a good amount of half-open hihat, and the cymbals in general are pretty rough sounding and not always easy to pick out or notate accurately. Do take some care where there's something linear happening with the hihats, but in general, the cymbals can be a suggestion— focus on the drum parts. The accents, too, are not critically important: all of the parts of the instrument are played pretty strongly all the time. You'd be more true to the original if you played everything the same volume than if you exaggerated the accents. The rolls and ruffs are played very closed; he really digs into the drum for them. Play the 32nd notes as singles.

As always with the transcriptions, if nothing else, give the track many listens through while following along on the page.