Why am I not always talking about Airto? I've spent fewer hours listening to him than most other drummers at the top of my personal influences list; I never had a period of chasing down everything he ever played on. But he's really, really great, and very influential, and I love his playing a lot. Jazz would not be what it is today without Fusion, Fusion wouldn't have been the same without Brazilian music, and Airto is the most influential Brazilian drummer in the USA. Bada bing, he's a big deal.

That's a little glib. Here's a transcription of his drumming on the head of Hot Sand, from his 1974 album Virgin Land. It's pretty straightforward: samba over a vamp, baiao-type groove on the B section, with breaks at the end of each section, plus a few fills: 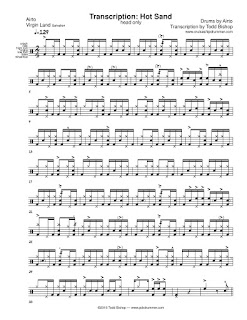 The A section has the hands doing some minor variations on a basic two-measure samba groove in 2/4. Listen for the accents— lots of 'a' of 2s of the first measure (matching the rhythm of the bass line) and 'e' of 1s of the second measure. The B section (most of page 2) is pretty repetitive, with a quasi-Baiao groove happening with the bass drum and cymbal. The fills are largely played by the right hand, with the left hand filling in softly. As with all good Brazilian drummers, there's a lot to be learned about touch here.