From Flora Purim's album Encounter, here's more Airto— this time playing a jazz waltz: Black Narcissus. I've transcribed the head of the tune, and the first couple of choruses of his playing behind Joe Henderson's tenor solo, after which there's some out-of-time blowing. There's a long free intro, and the transcription starts at 0:56. His playing here is modern, but quite simple, with some interesting triplet runs. Always interesting to hear someone playing jazz on a 70s studio-sounding drum set— not that it's some big novelty. 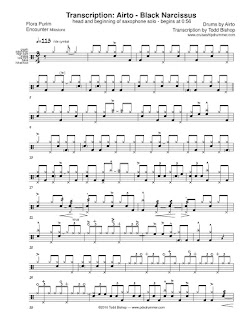 Swing the 8th notes. The cymbal pattern is largely a shuffle rhythm, with running swing 8th notes— though it doesn't sound like a shuffle the way he plays it. Not a lot of action on the snare drum, you'll notice; a lot of single notes, a lot of &s of 2. The rolls are generally played closed, as multiple-bounce rolls; I've indicated where one of them should be played as unmetered singles.