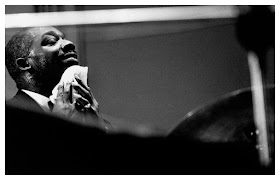 [Oh heck, this is from 2014— oh well. Just saw it on Famoudou Don Moye's Facebook feed today. Whatever.]

Before him, jazz drummers kept time lightly on the bass drum. Kenny Clarke used bass drum sparingly, often tethered to his snare, for dramatic accents in odd places — what jazz folk call "dropping bombs." He drew on his playing for stage shows, where drummers punctuate the action with split-second timing. Clarke kicked a band along.


Before Clarke— I'm not going to call him “Klook”, like I knew him— drummers kept time often quite heavily on the bass drum, and the snare drum, too, with a swing-style march rhythm. They also played the familiar thing on the hihat— that was Papa Jo Jones's thing. You can get a more detailed idea of what he did in his Modern Drummer interview with Ed Thigpen— I've excerpted the relevant passages. This post about Charley Wilcoxon's Drum Method, as well as the Mel Lewis's history of jazz drumming interviews, and, hey, records, can give you an idea of what swing-era drumming was in the early part of Clarke's career, before Bebop.
Todd Bishop at 8:59 AM
Share