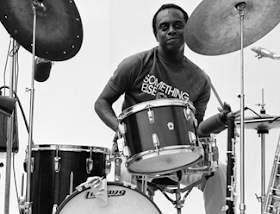 On the Jazz At Lincoln Center blog, drummer Tootie Heath tells how a weeklong engagement he played with Thelonious Monk went down:

I played a week with Monk and, every night, Nica [Monk’s friend and noted jazz patron Baroness Pannonica de Koenigswarter] would bring him from New York in the Rolls Royce to the club. They would sit out in front of the club, 15-20 minutes before time to hit, and Thelonious would be smoking and Nica would have her cigarette holder and she would be smoking. They were sitting in the Rolls Royce and then he would come in the club with his hat and coat on, sit down at the piano, [wouldn't] say nothing to us… nothing!

We didn’t know what we were playing… nothing! We had to know Monk’s music. Some of the songs, [bassist] Jimmy Bond didn’t know what key they were in, so he was trying to watch Monk’s left hand to try to find out which key. But Jimmy was such a wonderful musician that he was able to really figure it out after a little bit.

Thelonious had his back to us; he’s playing piano facing this way and drums are back there and bass is back there. So every night he would end the set and walk off—never take his hat or coat off, go out, sit in the car on the break, come back in, still didn’t say nothing.

He did this for the whole week. So we were trying to figure out, “Man, does he hate us? Does he like us? Are we playing his music right?” But that was it! He never said anything! I didn’t get it.