4-Way Coordination by Marvin Dahlgren and Elliot Fine is one the more punishing books in the literature of drumming. I've written about my past issues with the book— mainly, its foundational exercises are organized based on a mathematical logic, without apparent consideration of a musical purpose— that's all. But we've made up now, and I've been using it quite a bit in in the last few years.

You should already own it, but here's a sample from the first page of exercises: 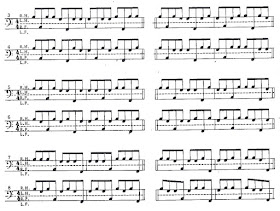 Unusual notation system aside, this looks like normal linear funk vocabulary (normal now, in part because of the existence of this book) but the way it's actually written, it doesn't sound like music. So practicing it can feel like you're digging a very large ditch. What we'll do here is look at some ways of making actual funk grooves out of it, which will hopefully be an enticement to working on it more, while making it more influential on your real-world playing.

In normal drum notation, the first measure of line 4 looks like this:

An easy thing to do to make it sound like a funk groove is to accent the snare drum on 3 (we're playing in 2/2, but for clarity I'll count the rhythms in 4), and ghost the other snare drum notes:

The next obvious thing missing that we normally expect to see is a bass drum on 1. Let's add that:

Adding a bass drum to any of the right hand/hihat notes is also a no brainer. You could use any combination of these added notes:

Much more after the break:

It's easy to make a two measure pattern out of this by adding the bass drum on 1 in the first measure, and not adding it in the second measure. Here I've added a couple of more notes to give us an actual serviceable linear funk groove:

Next, using that same combination with the hands as your base pattern, play the hihat on both foot notes. Our beat 1 and 2 are actually beats 3 and 4 of the second measure of the book pattern. You can think of it that way if you want; I just 1) look at the first measure hand part, 2) play both foot notes with the left foot, and— next step— 3) add bass drum to any of the right hand notes.

This is an excellent time to start thinking about the open sounds that are created by these combinations of hand and foot notes on the hihat. Make an open sound on every right hand note before a foot note:

Then we can do the same thing as before: add bass drum to any/all of the right hand notes:

You can run this entire process with the first measure of every pattern on pages 4-6. Some of them will work better than others. Let's look at the second measure of the book exercises. They all begin with the snare drum, which is not an ideal way to start a funk groove, so maybe we want to figure out something else to do with them. Here's the second measure of the first exercise on line 4, written in normal notation:

If we just add some accents to the pattern as written, it can act as a fill, or just as an extra-syncopated two-measure funk groove (I'd probably not play the accent on 1 in the second measure in that case):

If you play the first measure three times, then play the second measure, you have a reasonable four measure phrase with a fill or variation at the end:

That phrase again, with some extra bass drum notes in unison with the right hand:

Once you can do all these steps with all the patterns on pages 4-6 solidly at a moderate tempo, say, half note = 80, you can begin combining exercises. Either combine the first two beats of one exercise with the last two beats of another, or combine full measures of different exercises. You won't be able to cover all of the possibilities— a fact of life with all of Dahlgren's and Fine's materials— so do what you want. From doing the initial process you'll know what works for you and what doesn't, so you can use your judgment to begin shaping your personal professional vocabulary.
Todd Bishop at 10:07 AM
Share