Have I mentioned what a great idea it is to follow @Bose on Twitter? I follow a comedian (and former Superchunk drummer) Todd Barry, and saw this tweet of his, and had this exchange: 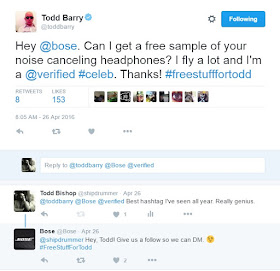 I thought what Barry said was a joke, but the Bose people messaged me after I followed them, took my address, and overnighted me some of their latest-generation noise-canceling headphones: 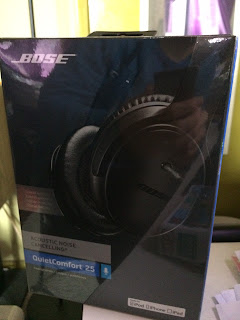 These things cost 300 bucks. And they're quite amazing; I tried practicing with the NC function on, and it seriously reduces the sound of the drums— about 75-85% I guess— so the volume through the headphones can be lower. With both cans on it's actually too much— I need to hear more drums— so I practice with one can off my ear. But I do that anyway. The sound fidelity is awesome, of course.