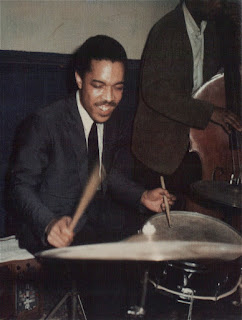 This is from Ted Panken's memorial drummers' roundtable on Billy Higgins, broadcast on WKCR after Billy Higgins's death in 2001. Here Jeff Watts talks about what Higgins meant to him:

I first began to collect jazz records around 1978 and 1979, just obvious things like Art Blakey and Philly Joe Jones and Max Roach.  By a certain point I was able to identify people like that and Roy Haynes, but every once in a while I would get fooled, because I would hear a drummer who would have a certain sound in his cymbal beat that had like a street thing in it, and it was kind of reminiscent of Art Blakey but something was different about it.

I kind of became able to identify his style just through a process of elimination, just through seeing the range of things he was able to do.  I think a lot of the things that are going to be said about him are going to be a bit redundant, as far as unique touch and his spiritual quality and the way he could conjure up things that are African and play beats that… Like many of the great jazz drummers, they would tend to put a personal stamp on things from the Caribbean and Latin America, find their own ways of playing Latin music that would in turn influence the Latin drummers.  Things like that, and the boogaloo beat he played that’s unsurpassed that I think people will be sampling twenty years from now— if they’re still doing that stuff.

But I didn’t see him much until I came to New York, and seeing him is a whole nother trip, because you see how he goes about doing his thing.  The ease and the economy of motion he had… Probably the closest thing for me to seeing someone like Papa Jo Jones, someone that I  never got to see in person— that ease with the instrument.

Whenever you’re trying to learn about this music, at least the way my mind works, I’ll try to put things together and get a combination of this and that.  But after seeing the breadth of his wisdom and his career, I’ve started to recognize someone who had a very organic relationship with life and with music.  Even though he had a lot of specific information under his hands and in his mind, at the moment when he interacted with the music it was like an environmental thing.  Whatever he was in the middle of, he would just find something really special for that music, something that you couldn’t just figure out.  A lot of is experience, but a lot of it is just having a very natural relationship with life and with people.  You’d see how he interacts and talks with people that I’m sure he never met before, but he would just be like a regular brother and very-very cool.


Much more at Panken's site— go read the whole thing.
Todd Bishop at 8:06 AM
Share