Chad Smith interviews Ginger Baker. Most surprising occurrence: Smith never screams “WHY ARE YOU EVEN ALIVE?” Seriously. You don't need to watch— well, any of it, actually— but definitely not past 14:40, where Smith's look encapsulates the misery of this thing. Baker is just an utter waste of time at this point.

Here's an easy cut time funk technical study, sort of a flanker for my basic method, serving really no purpose except to set up a situation where unexpected things can happen. It's easy to get locked into your normal way of playing, so what we'll do here is disrupt that a little bit, playing some ordinary-sounding grooves in a non-ordinary way. It's challenging enough to introduce something new, but easy enough that you won't have to dedicate a ton of time to something of questionable direct utility. It hints at the open-handed thing, without going full-on “I'm going to mindlessly do everything backwards in the name of an idea”, which I hate.

You recall the foundation groove from my basic two-handed method, with the hihat and snare played with the right hand only:

What we'll do is play that groove, and a variety of others, with a mixed sticking derived from pp. 8-9 of Syncopation by Ted Reed (Lesson 3, in the new edition)— the section with the linear quarter notes. We'll interpret those exercises as stickings: stems down = left hand, stems up = right hand. So line 6, for example:

You can get the stickings from anywhere, but what the hell, these are already in the book we're using and they're in the right rhythm and everything. So: play that sticking on the snare drum and hihat, like in that funk groove— snare drum on 3 with whichever hand it falls on in the sticking, all the other beats on the hihat:

Then play these various stickings with that voicing over the bass drum parts from my pages of cut time funk beats. As a warm up for the mixed stickings, I suggest playing whatever groove you're working on with RH only and LH hand only. 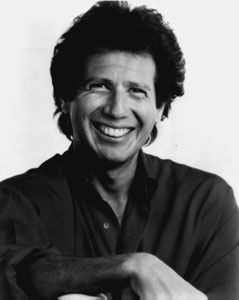 
There's also a great exchange in Shandling's Comedians In Cars Getting Coffee video with Jerry Seinfeld. Seinfeld laments about where all comedians' material goes when they die:

JS: Gee, all that material, you worked so hard on it, it's just gone. It doesn't mean anything to anyone any more, and it took so much work to create it.

GS: That material and your material is purely a vehicle for you to express your spirit, and your soul, and your being...

It doesn't have any value beyond you expressing yourself spiritually in a very soulful, spiritual way. It's why you're on the planet.

I haven't had time to watch this yet, but it's guaranteed to be good:

[h/t to Bo Eder at Drummerworld]

I've been interested in modulating rhythms lately, so here's a little snare drum etude derived from my previous etude in 5/8. It's actually the same piece— I've just changed the meter to 2/4, and changed the rhythm to 8th notes and triplets. 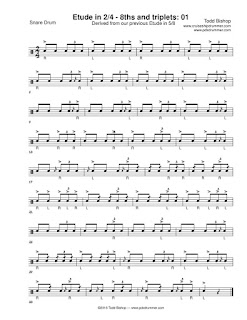 It's a good idea to set your click to quarter notes to do the rhythm accurately; with it changing so rapidly it's easy to run the note values into each other, especially as the accents and ornamentation get more obscure. The suggested sticking is alternating all the way through; the stickings indicated on the page is just to assist with that.

I've been working quite a bit with this cut time funk method from last year— part of what I've been doing instead of writing more blog posts. I'm not just writing junk to burn up bandwidth, man! Previously we had been applying a variety of two-handed hihat parts (which we get from the book Syncopation) over some one-measure funk grooves in 2/2. Now we're going to start using some four beat long patterns: 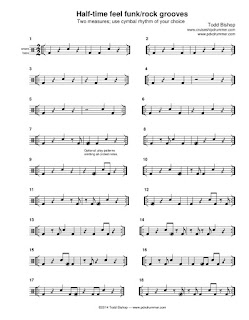 Get the pdf, we'll talk about what to do with this after the break.

Daily best music in the world: end of the 80s with Bill Frisell

Another of my all time favorite records, Is That You? by Bill Frisell, with Joey Baron on drums. It's lightly flawed with an in-your-face overprocessed drum sound, produced by Wayne Horvitz, but whatever. It's not the first messed up drum sound in jazz. It's a dated sound, but it just makes me think of the movies Akira, and Robocop, and Terminator 2. Cyberpunk. It's technoid in that ruthless late 80s sort of way. It's an angular collection of tunes, but that works with the aesthetic I was describing above. The record still hooks you.

He talks about a lot of things, but his comments on rudiments (after 2:30) are interesting:

I don't know if I would take that completely at face value— in answering the question he seems to have a certain way of playing the rudiments in mind when saying what he doesn't/can't do. I find it hard to believe he never spent any time with them at all. Watching him solo, he does use a lot of singles— technically a rudiment, but not necessarily indicative of someone who has studied “the rudiments”— and some full drum set patterns of his own devising.

[h/t to Tony at Drummerworld]

This week I've been working out of Odd Meter Calisthenics, a very good book by Mitchell Peters, which covers a lot of stuff in */8 meters. Which led me to write out a little study in 5/8, based on some things I was improvising on the practice pad: 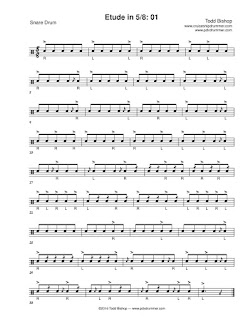 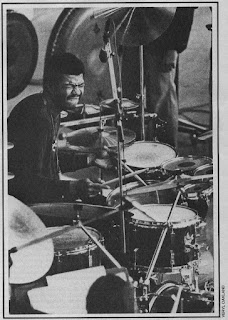 “Do it 'til you get to a certain point technically where you don't do it.”

This is a song from my childhood which I only ever new from one line, which my college-age friend Tom, from the Big Brother/Big Sister program, used to sing at odd times:


This was about 1976. Searching the lyric on the Google machine, it turns out the song was Southbound, by Three Dog Night, the ultimate early 70s band. It was an exuberant time— the word “party” was first used as a verb, and the phrase “party time” was coined and liberally splashed around like so much then-popular Jōvan Musk. A lot of people wore beards and/or mustaches, and body hair was in. Macramé was at its zenith. Hippies were current. People said man a lot, and WOOOed a lot— here: the ultimate 70s woo. That's the crux of 1971-75.

Whatever. That was the vibe of the period to my 5-9 year old self...

THE TUNE, anyhow, from the band's last album on the cusp of the Disco era, is a solid mid-70s studio funk number. The drummers credited for the album are Jeff Porcaro, Ed Greene, and Mickey McNeel. I can't find info for who plays on what, but in my ignorance of Greene's and McNeel's playing, I'm guessing it's Porcaro. 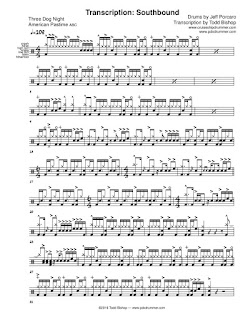 As you can guess from looking at it, the hihat part is played with both hands alternating, and the snare drum played with the right hand. The right hand is generally emphasized in the hihat rhythm— he especially seems to lean on the 3. He'll often play the bass drum and snare drum in unison: he usually hits the 4 with both drums, as well as the stops, and big ensemble hits. The entire song is played on a closed hihat, and the crash cymbal is used sparingly— often hits are played on a closed hihat.

This would be a good transcription to actually play, to learn how to play funk effectively. If you're going to do that, don't get hung up on very minor variations in the time feel— you'll have to judge what is musically significant and what you can ignore.

Here's the rest of that thing we were looking at the other day: Zigaboo Modeliste's playing on The Mob, from the Meters album Look-ka Py Py. On the first and last A sections, he improvises a non-repetitive groove, with the hihat sparsely played in an interesting way. See that previous Groove o' The Day from this album, and you can play the whole tune, except for a couple of fills. 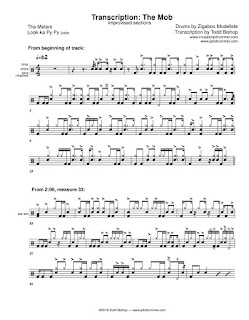 The hihat is played pretty softly, except where it's accented, and by itself— on the accented snare drum/hihat unisons, play it light. Listen to the recording.

The 1 is a little hidden at the beginning of the track, so seeing the basic rhythm of the guitar riff written out will help you get oriented:

Here's a page of basic two-beat rhythms for use as rock/funk fills, which I wrote for my intermediate students. 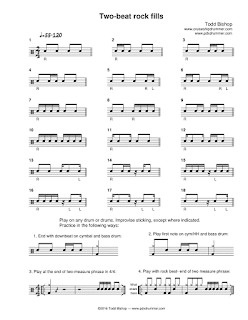 You can and should play these on any one drum, or move them around the drums. Play them at an even volume, or add accents. Rushing during fills is a universal bad thing lots of drummers do, so play with a metronome and practice 1) not rushing, and 2) not feeling physically tempted to rush— you know the feeling I'm talking about.

Per the instructions on the page, you should practice:
1. Ending the fill with a bass drum and cymbal on 1.
2. Playing the first note of the fill on the drums, or on a cymbal, together with the bass drum.
3. Make a two-measure phrase, filling at the end, crashing on 1, resting during the middle of the phrase.
4. Two-measure phrase, playing a rock groove of your choice for the first six beats, playing the fill on the last two beats.


Use whatever stickings you like; I've written them in in key places, and you can use them or ignore them as you see fit. Usually you'll want to start with the right hand, but you can also start with the left. Stickings should mostly alternate, or you can try natural sticking, too. Or whatever you need to do to get around the drums. You can also add flams or unisons between hands (on different drums) if you feel like it. HECK, you can play some notes with the bass drum if you want. I've given a tempo range of 55-120, but practice them slowly— give yourself enough time to think about what you're going to do, and do it cleanly, with solid rhythm.

You don't need to exhaustively run through every possibility— just run these until you're able to improvise your own fills along similar lines.

Get the pdf
Todd Bishop at 10:01 AM No comments:
Share
‹
›
Home
View web version