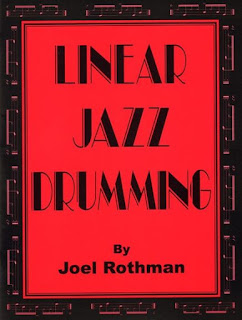 Received a few new books in the mail from author/publisher Joel Rothman, two of which I'll review today: Drummin' In The Rhythm Of Rock with Linear Patterns, and Linear Jazz Drumming. Rothman has been an extremely prolific drum author for over 50 years now, and he has a number of very valuable titles to his credit: Basic Drumming, most famously, as well as The Compleat Jazz Drummer, and the Mini-Monster Book of Rock Drumming— favorites of mine. I like that his books always keep a practical focus, are very masterable— they always include a lot of patterns, but you can devour them pretty quickly. Everything in them you will use in the field, or is immediate background for things you'll use in the field.

My biggest complaint is that he is sometimes too prolific. He may put in too much stuff, making a very long and shallow curve— you can wear out your user your running endless permutations. There are only so many practice hours in the day, and at a certain point, the extra pages of stuff can become a barrier to people getting to the best part of your book.

That's not a problem with the books we're looking at today; they're each focused on a single idea, which are treated fully without wandering, and without bogging down in endless variations. They each deal with linear drumming patterns for three voices— cymbal, snare, and bass. There are shorter sections using four way coordination. The patterns are derived from a single idea: starting with a cymbal rhythm, and filling in the gaps with the snare drum and bass drum. There are no unisons between limbs written, and there are rarely more than two notes in a row without a rest with any limb— both limitations I like. The jazz book deals with triplets, and the rock book deals with 16th notes. Many or most of the cymbal rhythms are not standard jazz or funk/rock ostinatos, so I don't see the particular value of organizing the books around them— except that it makes more sense than organizing them by one of the other voices.

The jazz book is good for developing a modern, abstract, and very triplety Jack Dejohnette-like way of playing jazz at slow-to-medium tempos. You could regard it as Stick Control for that type of playing. It's superficially similar to Elvin Jones's thing too, but most of the cymbal rhythms are so abstract that the total package of materials is really quite a different thing. Despite the cymbal-based format, we've really mostly abandoned the right hand dominated, ride-cymbal focused method, so central to jazz drumming in general and Elvin's thing in particular, in favor of a true three-limb approach. I'll say that if you've been doing my Afro 6/8 exercises, this book will be a good addition to that.

I recommend the jazz book for any advanced student high school level or above, who is practicing a lot, and currently trying to assimilate a Dejohnette/Elvin Jones thing— who already has a solid foundation in normal, ride-cymbal based playing. I think it will be especially good for developing a very modern two feel.

The rock book is similar, with the same parameters, except using (mostly) 16th notes, and being oriented to funk vocabulary. I think the format shows its limitations a bit more here, and in working with it, I would probably add some optional bass drum notes. Mainly, I would add BD on 1 (most patterns do not have BD on the downbeat), and add it to certain cymbal notes, so the RH/RF play in unison at least occasionally. You could indicate the optional notes by just circling the cymbal notes in pencil.

I'm in favor of keeping a lot of books around, because the way materials are organized affects what I can do with them. I can go very different places with similar materials just because of what the author decides to put on a single page. For example, the patterns here are similar to what you might find in Dahlgren & Fine, except they're organized to be reminiscent of a jazz time feel, or funk feel, which, along with the limitations I described above, makes them more practicable to me. If you played every possible combination of D&F exercises you would arrive at the same patterns, but that's an exponentially larger undertaking. And that's really most of an author's job: to organize materials in a way that you can work on them productively. So while much of what's covered here is similar to other books, they're different enough to be worth having in your library if you're serious about this type of playing.

You can order the books from www.joelrothman.com— scroll through to find them.