Grooves o' the day: all the grooves from Look-ka Py Py

Let's do a whole record for the groove of the day— and a very famous one at that: Look-Ka Py Py, by The Meters. The drummer is Zigaboo Modeliste, the New Orleans funk legend. We've covered him pretty heavily here, but if you don't know who he is, get thee to the archives, and go buy a bunch of Meters albums— don't think, just do it.

Mr. Modeliste is still actively performing, and you can follow him on Twitter to find out what he's up to, and to go see him play. 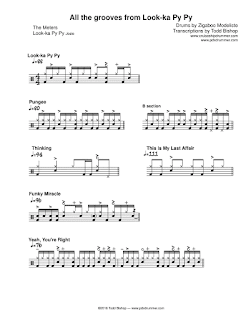 I see a couple of typos as I'm going to post this. Worst of all, I've left out the tune Rigor Mortis altogether [UPDATE: wtf, also Dry Spell!]— oops! I'll fix those for the book, I guess. Most of these examples give a pretty accurate picture of what's played on the actual tune; most grooves are not heavily varied, and fills are generally pretty sparse. On The Mob the A sections are completely improvised and non-repetitive, in the broken-up style of the example I transcribed— I'll write out the whole drum part soon. One notation you might wonder about are the tenuto marks on Yeah, You're Right. Those are slightly open hihat notes— just a little sizzle without being a full-fledged open. Accented snare drum notes are solid rim shots.

Audio is after the break:


Here's the whole album. It's awfully weird that you can just pull it off the Internet like that— the guy who made the video is certainly not the rights holder. We're all ripping off the band and the people who paid to release this music by using it like this, so consider this only for convenience. If you're a serious student, you need to own this record— that means you have to go buy a hard copy of it. Serious musicians have a library. Streaming it does not cut it.