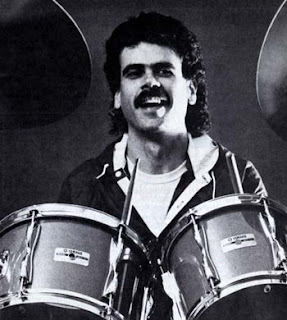 Great piece from Rhythm Magazine with some comments on funk drumming from Tower of Power drummer David Garibaldi. I've pulled my choice favorite comments, but there's a lot more, so go read the whole piece.


“I think it is more consistency than it is necessarily time. Time can be fluid, it can be elastic, it can move, which is a different thought process because for a lot of r'n'b thinking it is supposed to be immovable. We move around a lot because it feels good to do that.

“It's not overanalysing. It's a beat, you play it. Let it go. It's a perception that can be developed and improved upon throughout your musical life but it can also be your musical handwriting, how you perceive time.

“In the end you have to accept what you are. If it speeds up a little bit, if it slows down a little bit, that's what happens in the course of your musical life. In a way, it's a reflection of your life but you can certainly work on it and as you develop your life to become more of a stable person that can be reflected in your music and playing in a more stable way.”


“One more thing about drummers and bass players, if one guy can feel the time better than the other guy the best way to change that is for them to find a place in the middle so that they can lock together.

“I guarantee you that the time issues will be solved if they will but listen to one another and quit talking about it. It's going to go where it's going to go.

“Rocco and I never discuss anything and those times when we've had discussions the outcome has been the poorest. We talk about ideas we want to try but we just play with each other.

“I once did a clinic with Randy Brecker for some school kids in Santa Barbara, California. One kid asked, 'If you could have us take one thing from this today, what would it be?' Randy said, 'I think it would be to listen to one another.' That's all he said but it was profound.”


Just to highlight that one thing: quit talking about it.


“When I started playing more fills and being more concerned about that than the groove, I think my playing suffered. The root r'n'b concept is no fills. Zero. None. Have the discipline to play one groove for the length of the song while resisting the temptation to 'make it better' by playing a fill. It's unnecessary.

“Those James Brown guys, you couldn't find a fill within a 150 miles but their commitment to the groove was so awesome. It's your commitment to what you're doing that sells it.

“I think a really good example of that is Steve Gadd. He sells the most simple stuff because of his commitment to it. [...] Places where you think there should be a fill, he's not playing any fills, all the places where we would think we'd be 'making it better', he doesn't do that. He just sticks the groove up your ass.

“That's really how it should be. Watch the James Brown YouTube clips and you're not going to hear one fill. It's just not the way it's done in the world of James Brown. Keep those fills at home. Keep them locked up. That being said, there's nothing wrong with fills and, done at the right moment, they're an awesome enhancement to a great groove. What I learned is that fills are secondary to the groove and for them to work, they must be in time and in context.”


“If that's happening to you, you're not really looking at the musical problems you are having that need to be addressed. I think that if you look at the areas that you need to improve upon then all of a sudden things appear that need to get practiced. I'm always looking at sections of tunes that I'm not performing right. There are always new things to develop, but the main thing is if you look at your areas of need then there will be plenty of stuff to practice.”