A little transcription of Joey Baron playing in Bill Frisell/Americana mode on Cattle Drive, from Frisell's original music for the Buster Keaton film Go West. It's sort of a beginner's version of the ricky-ticky thing he does on tunes like Pip Squeak. like I've written it in 6/4, but you can just think of it as a waltz. The theme and solo form is 9 bars (of 6/4) long. 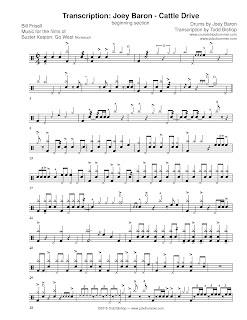 Baron uses more sounds than normal on this— including cowbell, woodblock, and an unidentified sheet metal sound— check out the key at the end. Virtually the entire cymbal part is played on the crash cymbal. He generally plays a lot of different articulations— rim shots, buzzes, and a lot of things that are difficult or impossible to transcribe, but here he's pretty straightforward.