You're not going to be seeing much of me for a few days— I'm getting married tomorrow, I've got a pre-wedding party today, then a micro-honeymoon at the Oregon coast Wednesday through Friday (the real one has us in France in December, so don't pity us)... so, yeah... light posting this week...

Displacement is a popular drummerland topic, but as a concept it's not a thing I'm real into. I think mostly people are trying to sell drum lessons, with cool, advanced/insider-y sounding techniques. We're not doing this to be hip, throw people off and then make fun of them for getting lost; this is more of a basic way of opening up basic grooves a little bit, in music where that is appropriate. A lot of drummery-drummers have been messing with it for some years, but the main precedent that concerns us in how it was used by James Brown's drummers— see Stanton Moore's book Groove Alchemy for an explanation of that. Being used in real music for the masses is sort of the gold standard for legitimacy for these “advanced” techniques. I don't want to do things just because an amazing drummer did them in a display of his awesomeness.

The idea here is pretty simple: in a two-measure phrase, we play a basic rock beat for one measure, and then the same rock beat shifted an 8th note late. Basically we're adding an 8th note (played on the hihat) at the beginning of the displaced measure, and losing the last 8th note of the displaced beat, so we can land on 1 at the top of the repeat. In the second section, the last two beats of the first measure, and the first two beats of the second measure are displaced— there's an extra 8th note on the hihat on 3 of the first measure, and we lose an 8th note of the displaced groove going back into the non-displaced pattern on 3 of the second  measure. Don't worry if this verbiage doesn't make sense— just look at the page and try to figure out why things are the way they are. If you can't figure it out, don't worry about that, either— just learn the notes and everything will be cool. 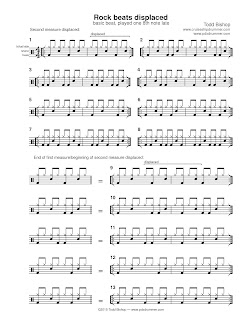 As a warmup, play the first measure of exercises 1-8, repeating many times, then play the exercises as written. For exercises 9-13, repeat the plain form of the beat (in the left hand colum) many times, then go into the displaced version— hopefully you'll be see/hear/think how they logically relate to each other. But if not, it doesn't really matter; just playing the patterns and learning their individual little melodies will be enough to add something to your playing. Learning to “do displacement” is not important, the sound of the patterns is.