The Vanguard 'n' me

Looking through my archives I found some of my old drum corps music, from the Santa Clara Vanguard in 1986. Hastily copied from Ralph Hardimon's score— I think this was basically my audition, now that I think about it; Ralph left me with the score for about 90 minutes, and I had to copy it out and learn the vibraphone part for the opener, Festive Overture by Shostakovich. So it's rather rough looking. I think I had only been playing mallets for about a year at this point— the first piece I ever actually learned was to prepare for my college audition, and that was in the spring of 1985.

I was in my freshman year in college, and thought my drum corps career was over after the Salem, Oregon corps I had marched with for several years folded after being edged out of DCI associate status, finishing 26th at nationals in 1985. I had been shifting my focus to drum set for several years, and was ready to move on from corps. Then a fellow percussion major at the University of Oregon, who was with the Vanguard in 1984, let me know in April that they had lost a couple of people from the pit (I think they call it “front ensemble” now?), and hooked it up for me to go down to California and audition for the spot. They also lost a tenor drummer, and for a moment I was deluded enough to think I could get that spot. But you don't just walk into a position like that six weeks before the first shows. 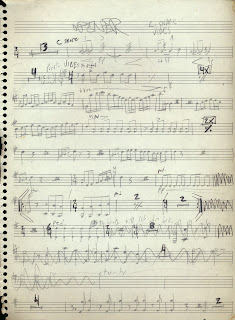 I think the person I was replacing may have been the low man in the section, because the parts were mostly not extremely difficult. I had a fast lick on the vibes in the opener, and some big, exposed concert tom parts in a fast piece called The Hut; the rest was mainly sound disks (tuned crotales), gong, concert snare drum, and bass drum. I did get to play the Garden Weasel, sort of a legendary SCV garden implement turned musical instrument, as well as destroy a very expensive 36" Paiste gong, several mallets, and nearly my wrist on the closer, The Great Gate of Kiev, from Prokofiev's Pictures At An Exhibition. One day early in the season Ralph rehearsed that part of the show— which we were playing with great taste and decorum, like good classical percussion students— he continually demanded more and more volume, until I was putting my whole body weight into these gong notes. That earned me a close up on the television broadcast of the DCI World Championships— I think a few veteran members were jealous of that.

The experience of being in the group was different from what I was expecting, based on the SCV alumni I knew; they were all music majors— Tony Cirone or Charles Dowd students— or music professionals, and I shared a lot more in common with them than I did with many members who were not on that path. There was a little bit of culture shock, me being the northwest, little-corps, hippie-schooled, ultra-left wing, transitioning-into-being-a-jazz-musician guy that I was. Overall it was a good experience; Ralph Hardimon I think is one of very few real artists involved in drum corps— he writes music— and I was very fortunate to get to be in one of his groups. Talking to my friend Nathan Beck, who I marched with previously, and who stuck around SCV after me, getting to work with Ralph was really our whole interest in continuing in the activity after high school.

Here's a recording of the show: