This is a continuation of a thing we did before, in which we worked on playing a very standard three note pattern, RLF, in 7/8, phrased 3+2+2— as it is in the tune Solitaire, by John Zorn, which has been our context for this series. If you're like me, you play a lot of three-note patterns, and have learned to do them well in 4/4 and 3/4 without getting lost. It's considerably more challenging in this fast 7/8. Here we'll take some triplet patterns from page 10 of  the book 4-Way Coordination, by Marvin Dahlgren and Elliot Fine, and learn to fit them into one measure of 7/8, creating a two measure phrase, alternating with an easy right hand-lead pattern in the second measure— a sticking pattern of RLLRLRL, with the RH on the cymbal, playing the bass drum along with the cymbal:

Mainly our job here is 1) to figure out what one measure of the three note pattern feels like— played all the way to beat one of the next measure, and 2) to figure out how to get into the second-measure RLLRLRL pattern, when, due to job 1, the first note may be a RH, RF, LH, or LF. And do it in a way that makes the downbeats clear to the people you're playing with. 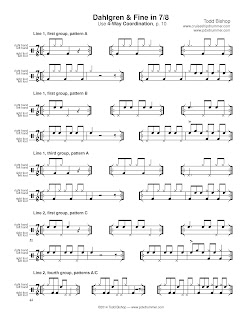 On the page are several examples of a sequence of exercises for developing this idea— apply them to each of the 48 one-beat patterns on p. 10 of 4WC. We're using a Dahlgren & Fine-style staff, with each line representing a specified hand or foot. We're assuming the right hand is on a cymbal, the left hand on the snare drum, right foot on bass drum, left foot on hihat. You'll notice there's a black note head in the right hand part in the second and fourth examples— play those notes on the snare drum. In those cases, our three-note pattern ended on a left hand, and to get into the second measure pattern, we're starting it with a LRL on the snare drum. Also, in the fourth example, you'll notice that the second measure of the last exercise ends with a quarter note; that's just to avoid doing three notes in a row with the left hand on the repeat— one of my biases in my practice methods is that I'll try to avoid more than two hits in a row with any limb. It makes it easier to go faster, and lessens the need for developing a lot of chops. It's just a basic philosophy of mine— I don't want my playing to be dependent on having a lot of technical prowess. You can do whatever you want, of course. Just put together one measure of the three note pattern with one measure of RLLRLRL, and connect them however you see fit.

...what an ugly mass of verbiage. If I were you, I wouldn't read it— I'd just look at what's on the page, and try to figure out why it is the way it is, and apply it to the other patterns in 4WC.

Other suggestions: It's a good idea to accent the first note of each measure, and also the fourth note: 1-2-3-1-2-1-2. When the second measure starts with a solo right hand, play the bass drum along with it; when it starts with a solo bass drum, play the cymbal along with it— if you don't have to do anything awkward to do that. Whatever you do, go for the easiest, most flowing thing, that also states the downbeats clearly.

More of this type of thing coming soon...