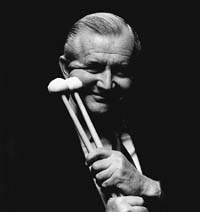 By now everyone knows Vic Firth has passed away. I don't know what to say about it, except that he wasn't just a gear manufacturer, he was also a musician, and made major contributions to the literature of percussion. For many of us, his snare drum stick, the SD-1 General, is the only snare drum stick, and is treated with respect and not abused, so one pair is made to last many years or decades— I'm sure a lot of my friends are still on their first pair. So it's a very personally felt thing that he's gone. There's a long piece in the Portland (Maine) Press Herald, and notices from Billboard, Jazz Times, and NPR. You can also leave your condolences on the company Facebook page.

UPDATE: Notice on the Percussive Arts Society web site, with this from Peter Erskine:


“I have had the great pleasure of knowing Vic personally for twenty-five years," said Peter Erskine, "and thanks to television and recordings, I have known his great music-making as timpanist of the Boston Symphony for even longer. And I have used his sticks since high school. Vic is the consummate musician, teacher and business person. No matter whose drumstick or mallet you use, we must all be grateful to Vic Firth for raising the level of stick and mallet design and production. Simply put, I wouldn't want to make any of my music without his sticks, and I cherish the friendship of the man and his family.”


And a New York Times notice.
Todd Bishop at 9:17 AM
Share