New book, and Dunlop and Krupa 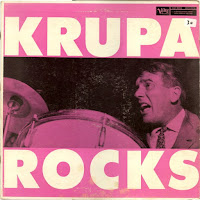 While I'm feverishly working on a new rock-and-funk book for the masses (or maybe a rock volume and a funk volume, if the thing grows out of control), visit Scott K. Fish's blog, where there a bit about Gene Krupa lining up some drums for Frankie Dunlop early in his career. And a whole lot of other great stuff from Fish's no doubt formidable archives— he was an editor at Modern Drummer in the early days, and met and wrote about a whole bunch of people we only dream about getting to talk to today.

The book, anyway, will be a complete system for rock/funk/pan-backbeat-genre drumming, using Ted Reed's Syncopation. The reason jazz drummers can improvise dense-sounding stuff so effortlessly is not because they/we are super-geniuses, it's because we have a good system for learning to play; in this book we'll adapt that system to the needs of backbeat-oriented drumming.

By the way, the Book of Intros, which I promised you late last year, has been basically finished for several months— I delayed putting it out to release the wonderful 2014 Book of the Blog, and now, before I actually release it, I need to open it up again and make sure I didn't embarrass myself by writing something stupid— always an urgent concern. We should be seeing the release of one or the other of these books within 6 weeks.
Todd Bishop at 6:55 AM
Share