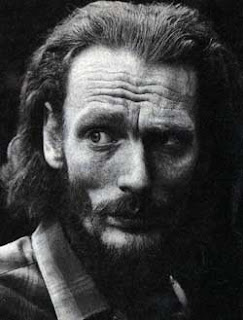 October 2019 update: Mr. Baker has died, and I've updated and expanded this post a bit, and put it in past tense. I'm rather critical of him. If that's not what you want to read about him, the drummer Alan Cook wrote a very nice remembrance here.

Watching the 2012 documentary about Ginger Baker, Beware of Mr. Baker, he was to all appearances a very simple man, possibly mentally ill, definitely a Grade A bastard, which—well, whatever— a lot of artists are not good human beings. But I don't feel there's any reason not to write frankly about him.

Along with John Bonham and Keith Moon, Baker was one of the famous “drummery” drummers to come out of rock in the 60s, although his influence has faded by comparison. Moon was rough as a player, but had more likable energy, and Bonham— where do we start?— John Bonham was the future of rock drumming. You could argue that Baker had broader ability; he played a wider variety of music than Bonham or Moon, and he was an actual jazz musician— he just wasn't a very good one.

I once owned an album Baker made in the 90s, which had Bill Frisell and Charlie Haden playing covers of some great tunes from earlier in their careers— it's basically the same fanboy album I would have made at the time if somebody gave me $50,000 to make the record of my dreams. I can't fault his taste in listening.


Listening to his playing there, all the ingredients are there for a rocking, Paul Motian-like concept, but it is just not happening. I'm not going to expend a lot of effort analyzing it, but the frequent, Bam-Bam style, mono-dynamic, mono-rhythmic tom tom tom fills are a large clue— a gross indication that we're missing something fundamental. I think whatever narcissistic personality disorder helped him attract a lot of attention and advance his career when he was young also messed with his musicianship.

Here's the movie. There's a considerable amount hagiographic Hollywood nonsense about his incredible unprecedented genius as a drummer, which is obviously not the case. And irritatingly, in the world of this movie, black artists exist primarily to prove Ginger Baker's greatness. It's a pretty grotesque distortion of history in that respect.