Transcription: Vinnie Colaiuta — Beat It With Your Fist

It is law that I must do an ultra-hairy Vinnie Coliauta transcription every time I do a fund raiser [Have you contributed yet? Please do. -tb], so here's Beat It With Your Fist, from Frank Zappa's album Return Of The Son Of Shut Up And Play Yer Guitar. It's one of the harder 29 measures of music I've attempted in a while: 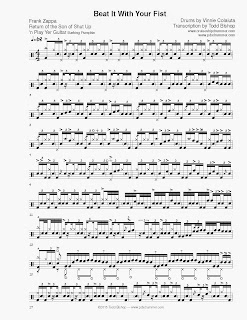 The really big sketchball lick is in measures 15 and 16— which I've chosen to write out as a single measure of 8/4— otherwise the barline is in a really messed-up place. The lick is septuplets— seven 16th notes in the place of four— against even 8th notes in the left foot... and the septuplets begin on the & of each beat. I would play that lick as running doubles— a few of the doubles will be split between two drums. You can learn that lick like this:

Play the repeated measure many times as written, then improvise moving your hands around the drums. When you can do that, trick yourself into thinking the downbeats are the &s: say “&” where it's written in the example, and then play the written ending with the 16th note triplet and crash on “1”.

If it's any consolation, with all of this crazy stuff happening, there is a little bit of variance in the length of the measures— the time does stretch a little bit, as low as 65 bpm, and as high as 72, averaged over one measure. Vinnie Colaiuta is, apparently, a human being.

This is another pdf that will only be available for the duration of the fund raiser.