I was going to take care of some other business today, but then I saw that it's Famoudou Don Moye's birthday, and wanted to pay tribute by giving one of my favorite things of his a really close listen. He's a drummer I think about a lot, in no small part because of the quality of his backbeats. Most young jazz drummers today, even some great ones, need a backbeatectomy— major reconstructive backbeat surgery. There's not enough substance there. On the other end of the spectrum are the regular backbeat players, who all seem to be hitting them way too hard, on diecast-hooped drums, making a sound that's just brutally ugly. Then there's this, Funky Aeco, from The Art Ensemble of Chicago's album The Third Decade, which is, sound-and-vibe-wise, a perfect, slamming American backbeat: 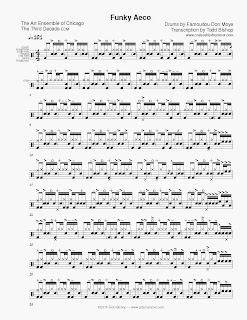 The total drum part is pretty organic; the 16th notes swing a bit, and there are a lot of dynamics within it, with ghost notes on the snare drum and sometimes the bass drum. And there are some half-open hihat sounds, which I've indicated with a tenuto mark (-) above the note. Rather than trying to work all that stuff out, just learn a basic form of the groove, check out some of the variations he plays, and try to get the vibe.

Live version of the same tune after the break: