Let's start the fund raiser with something amazing I never knew existed: Billy Higgins and Ed Blackwell playing Mississippi Delta drum-and-fife style, performing Othar Turner's classic Shimmy Shewobble, on Stanley Cowell's album Regeneration. You may have heard Turner playing the piece on the soundtrack of the movie Gangs Of New York. On this recording Higgins plays snare drum, and Blackwell plays a tenor drum. Nigerian singer Aleke Kanonu plays bass drum, and free jazz saxophonist Marion Brown plays fife. Blackwell's part isn't easy to hear, so I've transcribed just Higgins and Kanonu. If I were in school I'd be preparing this as a jury or recital piece— this is as worthy of serious study as anything in Portraits In Rhythm or any other snare drum book. 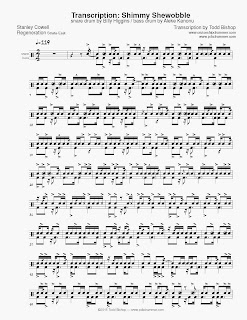 Higgins plays a lot of “flat” flams— unisons between hands, basically— which are indicated by the circled note heads; you can choose to play them, or not. I'll be playing them as actual flams. What flams are notated in the transcription are generally played pretty closed, but not quite flat. The drags are played open, as doubles, and rolls with an 8th note duration are played closed, as 5 stroke rolls. Xs in the snare drum part indicate a rim is being hit, and housetop accents indicate a rim shot. There are a few other types of articulations here and there, but don't let them hang you up. Don't be too regular in your execution— just because there are a lot of accents in a row doesn't mean they should all sound the same.

Kanonu plays the bass drum, likely using two mallets. There are a lot of open and muffled tones, which are too complex to notate accurately; but likely one hand is doing most of the playing, and the other is mostly doing the muffling. There is more dynamic shape to the bass drum part than I've indicated; I've only put in the biggest accents. On all the parts there is a light swing, and organic quality that is not captured in the notation— you'll have to listen closely to the music to attempt to capture the feel.

This is a really special piece I should be submitting to Percussive Notes, so the pdf will probably only be available during the fund raiser. Get it while you can...

Get the pdf - [This was a special feature only available during the blog fund raiser— to get it now, purchase the 2015 Book of the Blog.]