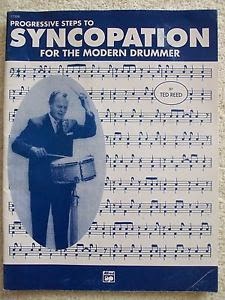 Perhaps not the best superlative for a list of books on drumming, but we get the picture. Here I've given some brief opinions on the entries in Modern Drummer's list of 25 timeless drum books. I've bolded the titles I think everyone should own.


1. STICK CONTROL FOR THE SNARE DRUMMER by George Lawrence Stone (Alfred)
Every drummer should own this, that's all. You do have to play the whole thing, not just the first page.


2. MASTER STUDIES by Joe Morello (Modern Drummer Publications)
Expands on some ideas found in Stone's Stick Control and Accents & Rebounds (which was actually ghost-co-written by Morello). This is really a complete system for practicing and playing the snare drum, that is not rudimentally based. It's similar to the rudimental system, and overlaps with it, but it's different. There's also a Master Studies II— best to own both volumes.


3. THE NEW BREED by Gary Chester (Modern Drummer Publications)
The major book for post Dave Weckl-style fusion drumming, and all-around pan-genre studio funk— Lately I feel that that type of playing is a bit of a plague, and I rarely crack this book. And you know I'm not really down with the open-handed stuff. Whatever. It's a major book.


4. ADVANCED FUNK STUDIES by Rick Latham (Latham Publications)
More a collection of licks and ideas than a method book. That's not a bad thing, but I was never able to do much with them in the form they're presented here. It's probably a decent book for getting your fusion clichés together.


5. REALISTIC ROCK by Carmine Appice (Alfred)
I really dislike the archaic notation system used here, so I have never used this book. Plus nobody I know ever used it that I'm aware of. I would need to see an updated edition with modern notation to really give it a fair shot.


6. GROOVE ALCHEMY by Stanton Moore (Hudson Music)
Great history book and style guide for certain areas of funk drumming. Moore's method for creating new grooves by combining elements of old ones, is not really for me. It's fine, I just don't think that way or play that way.


7. THE COMMANDMENTS OF R&B DRUMMING by Zoro (Alfred)
I have seen this book but don't own it; it looks like a solid player's history of R&B drumming.


8. FUTURE SOUNDS by David Garibaldi (Alfred)
Modern funk book a lot of people use. I learned a lot from Garibaldi's materials when I was in school, but the method here is just a little too abstract for me. If you work through this book and New Breed you'll definitely have your 80s-and-later fusion thing together.


9. THE DRUMSET MUSICIAN by Rod Morgenstein and Rick Mattingly (Hal Leonard)
I think this is the best all-around introduction to the drum set I've seen. Maybe best for mature beginning and intermediate players.


10. ADVANCED TECHNIQUES FOR THE MODERN DRUMMER by Jim Chapin (Alfred)
Another primary text for jazz drummers, that is showing its age now. I prefer using other books for this type of thing, but you do have to own this.


11. THE ART OF BOP DRUMMING by John Riley (Manhattan Music/Alfred)
Great introduction to jazz drumming. Contains a lot of information that students previously had to luck into— maybe you'd get exposed to that info, and maybe you wouldn't. You had to have a good teacher or be in a good scene.

2020 UPDATE: After writing this post, I wrote about some of my feelings about this book. Also someone online asked a question expressing similar sentiments, to which Riley responded directly.


12. MODERN RUDIMENTAL SWING SOLOS by Charley Wilcoxon (Ludwig Music)
This is a book many of your favorite jazz drummers worked through, so if you want to participate in that tradition, you probably should, too.


13. PATTERNS, VOLUME 1, 2, 3, 4 by Gary Chaffee (Alfred)
The major source for super advanced, Vinnie Colaiuta-style rhythm, as well as advanced fusion drumming. I spent a lot of time with these books, and am not sure 100% of it was well spent— I have never had to use the extremely advanced rhythms from vol 1 and 2 in actual music. When I use these books today, I ignore virtually all of the odd-tuplet related stuff. I use volume 3 (Time Functioning) extensively.


14. 4-WAY COORDINATION by Marvin Dahlgren and Elliot Fine (Alfred)
I've had my issues with this book in the past, but have come to terms with it. I developed my own version of the very difficult “harmonic” section, which I prefer to the original.


15. EVEN IN THE ODDS by Ralph Humphrey (C.L. Barnhouse)
This is a great drum method book. Not as sexily futuristic as Gary Chaffee's Patterns series, but for me it has been far more practical.


16. DRUMSET ESSENTIALS, VOLUME 1 by Peter Erskine (Alfred)
Never read or used this book, but Erskine is a great drum author and educator— I own several of his books, and all are extremely valuable.


17. THE ENCYCLOPEDIA OF DOUBLE BASS DRUMMING by Bobby Rondinelli and Michael Lauren (Modern Drummer Publications)
Never used this book, never looked at it, probably never will.


18. BASS DRUM CONTROL by Colin Bailey (Hal Leonard)
Not bad, but I glance at it every few years and am never moved to practice from it. Similar linear patterns to those found in Gary Chaffee's Patterns books.


19. THE SOUND OF BRUSHES by Ed Thigpen (Alfred)
When it came out in the 80s, this was a big leap forward for books on brushes, but the notation system is still pretty obscure. There's a more recent Berklee book on brushes which I found a little more usable. All jazz drummers should own it, though— it's by Ed Thigpen.


20. PROGRESSIVE STEPS TO SYNCOPATION FOR THE MODERN DRUMMER by Ted Reed (Alfred)
This book really belongs at the top of the list. The one absolutely essential, indispensable drum book. You can do everything that matters with it— everything in 4, anyway.

2020 UPDATE: Here's a post I wrote going into a little more detail about why Syncopation is so great.


22. PORTRAITS IN RHYTHM by Anthony J. Cirone (Alfred)
Advanced college-level book of snare drum etudes. Extremely challenging reading, and absolutely one of the modern classics of drumming literature. Most drummers will not know what to do with it.


23. MODERN READING TEXT IN 4/4 by Louie Bellson and Gil Breines (Alfred)
This is a standard book, but I've not used it a whole lot. Maybe it's balanced a little too much towards creating reading challenges, rather than just building basic familiarity with normal reading, as with Reed. Though it does fill some gaps in Reed, so it's worth having around.


24. AFRO-CUBAN RHYTHMS FOR DRUMSET by Frank Malabe and Bob Weiner (Alfred)
In the late 80s, this was the big modern Afro-Cuban/Salsa book. Today I prefer Ed Uribe's The Essence of Afro-Cuban Percussion and Drum Set. This book is more concise, but Uribe's book, though massively intimidating, has been better to practice from, and does a better job of demystifying this music.


25. WEST AFRICAN RHYTHMS FOR DRUMSET by Royal Hartigan (Alfred)
I've never looked at this, or used it. It's probably great. It's a little bit of a niche item for north American drummers, but if including it on the list got some people to investigate African music, it's a good thing.
Todd Bishop at 7:29 AM
Share