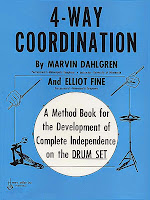 Here's a triplet workout in 3/4, using 4-Way Coordination by Marvin Dahlgren and Elliot Fine. The idea is fairly obvious, and has certainly occurred to a lot of people, but it might help for me to suggest some parameters.

The complete workout may not be immediately attainable for everyone, and you certainly won't be able to do it exhaustively in one session, but any part of it you complete— even just a warm-up— at any tempo, will be an accomplishment.

These are the lines that work the best for me with this exercise. But you can use any set of two lines of your choice: 1-2, 3-4, 5-6, or 7-8, and so on. Doing the exercises this way covers all of the inversions, so there's no need to do all of the exercises in each section. And don't work yourself to death covering every last variation I suggest here— if you just make a reasonable-length workout out of it, and do it consistently for a reasonable period of days or weeks, you'll get what you need out of it.

Play each four-note pattern in a triplet rhythm, in 3/4 time. This pattern from page 4:

When you can play one exercise this way 2-4 times perfectly at your chosen tempo, move on to the next pattern.


There are a whole raft of warmups and practice suggestions after the break:

If the complete exercise isn't happening for you right away, here are some preliminary things you can do, which are good exercises in their own right:

2. Play the four-note pattern by itself several times, in 2/4:

4. If you have problems with a particular exercise, or if you are aware of some inaccuracy within it, I suggest breaking it down as follows:

You can build the exercise from scratch from the beginning, starting with the first note, then the first two notes, then three notes, and so on, adding one more note at a time after you can do the present thing perfectly.

Or you can play the pattern starting on each part of the triplet:

The second note of the triplet:

With that inversion, adding the last note of the pattern at the beginning will help get the timing:

The third note of the triplet:

Again, it may help with the timing to add the first note of the pattern at the end:

Do play along with music, unless you're struggling with the very basics of the exercise.

2. Play a few measures of jazz waltz time between exercises; you want to integrate the linear pattern with your time feel, so you can move easily between the two, without a dramatic feel change.

3. You can start the exercise in the middle of a phrase. As the band on the recording starts a new phrase, you can play a couple of measures of time, then go into the linear exercise for the remainder of the phrase. You don't need to do it exactly the same way every time.

5. Listen to the music and try to come out of the exercise to catch a musical figure, or to follow a rhythm or accent in the melody of the tune. Really, just being aware of the music while playing the exercise will be enough at first.

Some other things you can do, if you have the exercise in its basic form more or less covered:

2. Accent slightly on the beat:

Just enough to make it obvious to yourself where the beat is, all the way through the pattern. Again, it's not something you have to do all the time, but you should take a minute to learn it.

3. Vary the accents. Just punch one or two accents every measure, or every two measures, in different places. Maybe on the first or last note of the triplet, or the last two notes of the triplet.

4. Move hands to other sounds
I usually default to playing my right hand on the cymbal, and left hand on the snare. You can improvise the moves, or use the stock moves we use with the Pages o' Coordination.

5. Vary your hihat technique. Do them heel up or heel down, with splashes, or a closed sound.

6. On patterns which use only one hand, play both hands in unison.

7. On patterns using only one foot, play both feet in unison.

8. On patterns using no bass drum, play the BD in unison with the RH part, with the RH on the
cymbal,

9. Experiment with modulating the rhythm. Start or end by playing the exercise as 8th notes or 16th notes. That's really a whole 'nother lesson... I'll just leave that with you as the seed of an idea...


Remember: make a reasonable-length workout out of all this, and, if you decide you want to work with it, do it consistently for a few days, or a week, or a few weeks. You do not need to repeat your routine exactly every day; allow some variation.