What's going on: my recording of Ornette Coleman's Mothers of the Veil

While I was traveling recently, I got a note from a reader who had very kindly purchased my CD Little Played Little Bird, the music of Ornette Coleman, asking for some analysis and explanation of my drumming on the opening track, “Mothers Of The Veil”:

First, listen to the original Ornette Coleman recording, from the album In All Languages:

You can hear that Billy Higgins does a sort-of Latin feel on the head, seemingly at a faster pace than that of melody; the rhythmic connection between the drums and horns is somewhat obscure. It sounds like he's playing a shuffle rhythm on his cymbal, but it's really a quasi-Latin feel in a fast 3; what his left hand is doing really coordinates with that, and where the time goes during the solos is based on it:

Here's my chart, which is basically just a transcription of the melody as played by Coleman and Don Cherry— I don't know what the original music, if any, looked like, but you could play this chart with a steady pulse all the way through, and arrive at something fairly close to what's on the original record— putting it in 5/4 I think gives it a similar pacing to the original, which might have just been phrased with a breath every measure. Listen through the head of each of the recordings while following the chart: 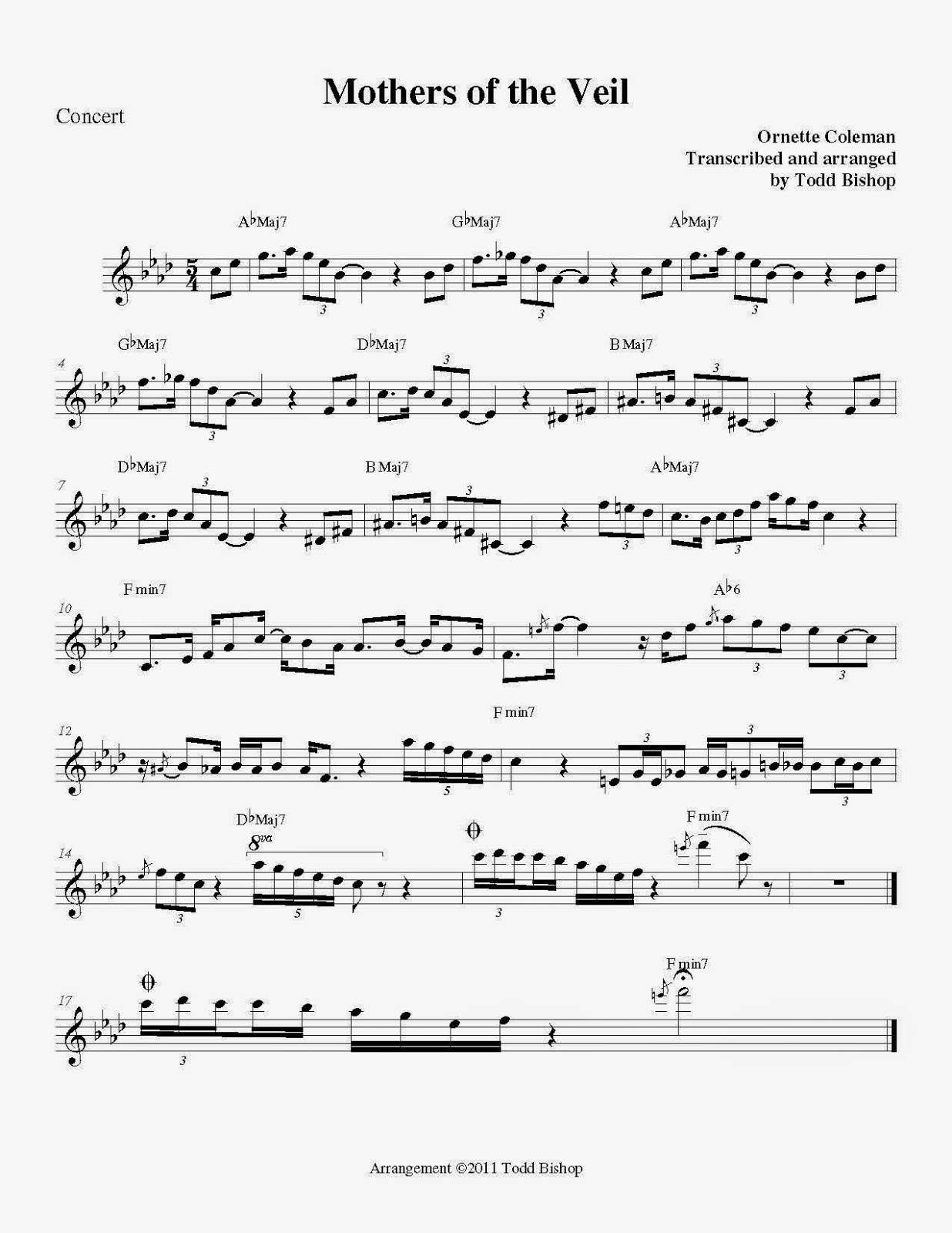 
I say it was written to be played basically in time, but because my saxophonists, Tim Willcox and Rich Cole, were not real familiar with the music, and were trying to stay together, they ended up playing it rubato anyway. I'm always having to tell horn players to move through free pieces faster. But what they did worked, and, time constraints being what they are, we kept it and put it on the record.

What the rhythm section is doing: It was never the idea that we would play the tune in 5/4, at the same tempo as the horns; rather, the horns would just play the tune, and the bass and drums would play a faster tempo region, without barlines. This is a thing I do a lot in free playing: suggest a counter-tempo, while phrasing with the lead instrument, stretching the time here and there to stay, somehow, “with” the horn. A good example of type of interaction we're going for is at 2:05, where the horns restate the end of the melody between solos; the drums are playing on all sides of the horn notes, but not with them, with an ending punctuation, and the time leading into the next solo, with no interruption in the sense of velocity.

It's a very intuitive thing, and we never worked out how it was going to happen, beyond me explaining the general concept to the players. I just give a Taxman-type count off, and we're in. The feel I'm doing is sort of a Billy Higgins generic Latin feel, with rim clicks on the snare drum, some tom toms, and a syncopated line on the cymbal. You can also hear that there is sometimes a strong pull towards a slower swing feel— there are some “skiplets” in there, as well as some functional dotted-quarter notes to my faster pulse, if you can dig that. On this recording, at least, any changes in the implied tempo are basically analogous to traditional vocal phrasing, breathing and stretching notes.

That's about it— you now understand it about as fully as I do.