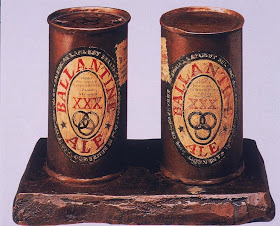 JOHNS: I was doing [...] sculptures of small objects—flashlights and light bulbs. Then I heard a story about Willem de Kooning. He was annoyed with my dealer, Leo Castelli, for some reason, and said something like, “That son-of-a-bitch; you could give him two beer cans and he could sell them.” I heard this and thought, “What a sculpture—two beer cans.” It seemed to me to fit in perfectly with what I was doing, so I did them—and Leo sold them.

INTERVIEWER: Should an artist accept suggestions—or his environment—so easily?

JOHNS: I think basically that’s a false way of thinking. Accept or reject, where’s the ease or the difficulty? I don’t put any value on a kind of thinking that puts limits on things. I prefer that the artist does what he does than that, after he’s done it, someone says he shouldn’t have done it. I would encourage everybody to do more rather than less.

The italics are mine. In this story, the cosmos gave Johns a small gift, in the form of a complaining Willem De Kooning, which was the perfect subject matter for a sculpture, because it happened to be along the lines of what Johns had already been doing. And which also happened to have a built-in anecdote, which he probably recognized at the outset. If he had not already been casting ordinary items in bronze and painting them, there would've been no context for him to take what De Kooning said as a suggestion for an actual artwork. The interviewer seems to feel that somehow Johns is letting somebody else do his work for him, but the idea is not the work. There's a huge gap between Johns saying “Hey, that's a good idea for a sculpture.” and the actual painted hunk of bronze that is the finished piece. And without Johns recognizing it as an idea, what De Kooning said was just a random, and mundane, conversational detail. Johns had to recognize the idea, then decide it was a good idea for him, then execute the work.