Oh, look, another transcription with no YouTube video— no worries, though, because as a serious listener, you already own this record. This is Paul Motian's playing during Bill Frisell's guitar solo on the tune Trinkle Tinkle, from Motian's album Monk In Motian. The form of the tune is AABA, with each A section having seven measures of 4/4 and one measure of 2/4; on the solos, the A sections are just eight measures of 4/4. That's the way it's done on Monk's records, as well; the solos are straight 32-bar AABA (on this record, the head is played that way, too).

Motian plays a lot of straight 8th notes along with the swing 8th notes, so I have notated the rhythms literally here; don't swing the 8th notes. There are a few strange-looking things in the transcription, but don't get too hung up on working them out exactly; use the page as a guide, and go for the vibe. 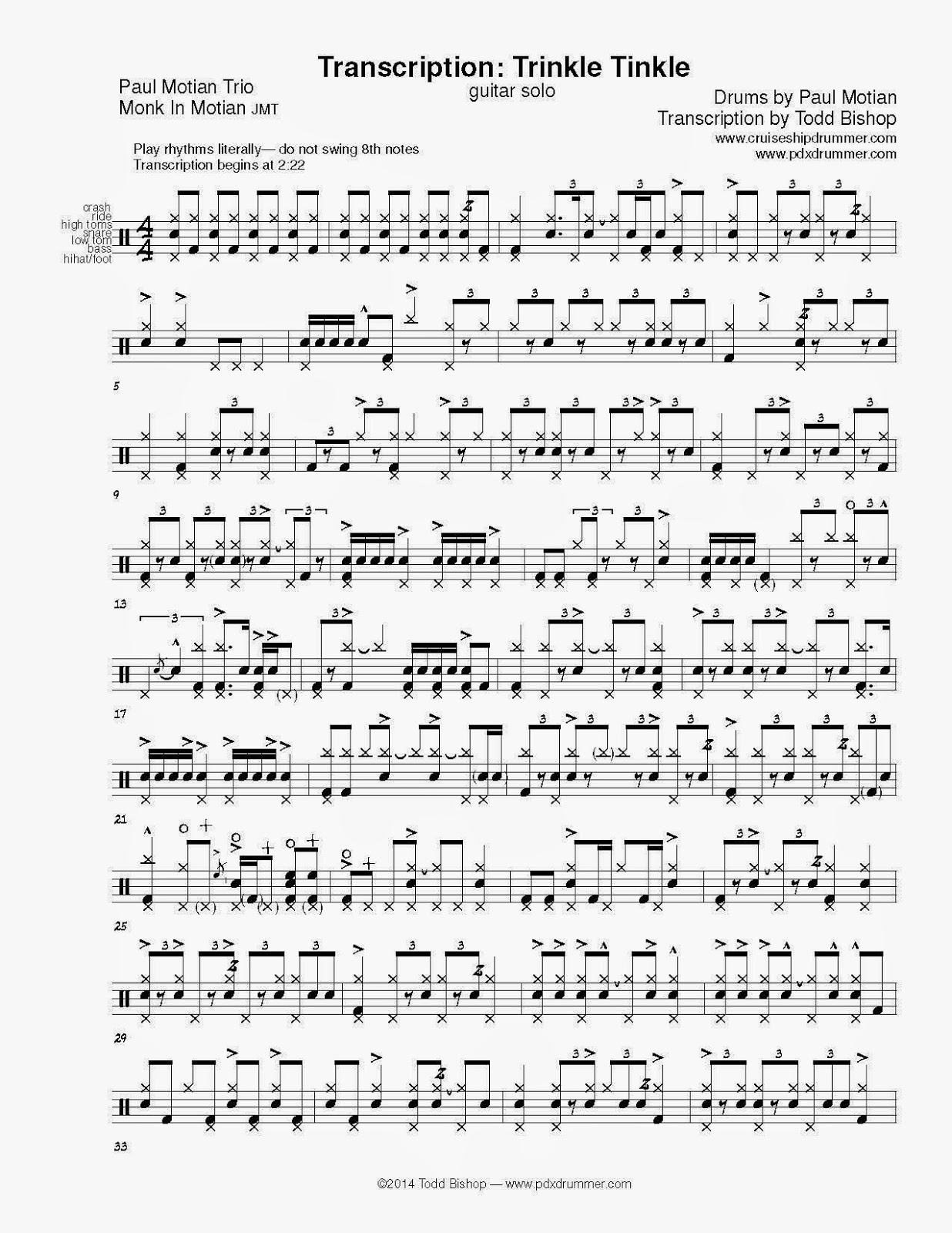 He plays the primary pulses very strongly throughout: he plays the 1 a lot, as well as a strong half note pulse, and quarter note pulse. The syncopations are simple and few. Much of what he's playing on the hihat seems to be sort of automatic, and it gets a little sloppy. In a few places he plays straight 8th notes on the hihat with his foot, while swinging with his hands, which I don't believe is a worked-out, deliberate thing; he's just letting his limbs run, there. If you're going to work up the transcription, I would you could just play quarter notes with the left foot, and leave it at that.

Where there is a buzz written on a note with both a cymbal and snare drum, buzz the snare drum only. The buzzes are generally very short. Housetop accents on a drum usually mean a rim shot very close to the edge of the drum, not necessarily a lot of volume. Housetops with a cymbal usually mean a crash.

He's using two cymbals, in addition to the hihats, which are just classically Paul Motian: one is obviously a 22" Paiste Sound Creation Dark Ride, and I believe the other is his famous old cracked A. Zildjian, which he used since he was in Bill Evans's band.