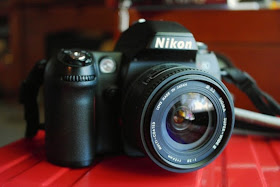 After the last photo post I got excited to do more film photography, and what better way to motivate myself to do that than to BUY MORE GEAR. Usually that's a bad idea; GAS, the American disease, is an ugly thing. But I haven't bought a camera in six or seven years, and part of the reason I legitimately don't shoot as much film as I used to, is that my digital camera (a late-oughts Nikon D40) is so much easier to carry around than my serious 35mm rig, an early-90s Nikon N90S— a great camera, but rather bloody heavy. The D40 is light enough that I actually take it places with me, and get pictures when the opportunities arise. So, upon consulting the oracle— photo gear geek Ken Rockwell— I discovered a couple of good late “prosumer” 35mm options that are basically dirt cheap, and lighter than the N90S.

I needed something that would be compatible with the Nikon gear I already own, so I went ahead and got an N80 body for $45, plus a 28-70mm/f3.5-4.5 zoom lens for another $45ish, for a total cost of about $100, with shipping. I could've spent another $50-100 for the heavier, slightly-more-pro F100, which I've coveted for a long time, but since weight is an issue, and I haven't been taking enough pictures to justify the small added expense, I got the N80. About this camera Rockwell summarizes:

The N80 offers features I want that the F100 lacks, and except for the slow [flash] sync speed seems to lack nothing significant. [...]

Overall, this is an easy camera to love. It is very light, quiet, and feels like it has a shutter at least as smooth and quiet as the F100. In fact, I suspect that the N80 may have a smoother mirror and shutter mechanism than the F100, and therefore may give sharper results with long lenses on tripods.

Unless you need the durability, fast sync speed or can write down some very serious specific reason you need a fancier camera, this is probably a better camera for most people then an F6 or F100. Why? Simple: it's lighter and cheaper. If you are on a budget then save your money for what matters: the lenses. Heck, who cares if it's plastic: you can throw one away and buy a second one and some film for the same price as just one F100. [...]


The zoom is a little shorter than I normally would like, but since I don't tend to shoot a lot in the telephoto range, I think I can live with the 70mm max. I'll just take a couple of steps closer to my subject. It's faster than most cheapo zooms, and also has a nice macro feature. The lens I've been using with the N90S is the very similar, but old and heavy, 28-80mm/f3.5-4.5. In principle I'm against these all-purpose consumer zooms, but the fast pro zooms cost several times more, and, again, are heavier, which somewhat defeats my purpose for this camera. And I don't want to be fooling around with carrying/switching out fixed-length lenses. Here's what Rockwell says about this lens:

My Nikon 28-70mm is one of my very favorite Nikon lenses because of its small size and weight, handy zoom and macro ranges, perfect ergonomics, a real 9-bladed diaphragm, and it's plenty sharp on my newest 36 MP FX D800 and D800E.

[...] This 28-70 is a very compact and high quality midrange zoom. It works great on FX digital and 35mm Nikons, as well as most DX cameras. This little gem was introduced to allow people to use a camera's built-in flash even at 28mm. Previous lenses, like the excellent 28-85mm f/3.5-4.5 AF [That's the lens I've been using on the N90S. -tb] were so big that the lens would cast a shadow into the image from a camera's built-in flash at 28mm.

This 28-70 is the fastest and best super-compact midrange zoom ever made by Nikon. All the others made later this size were crappy plastic-mount f/5.6 designs, or got bigger for the same quality or speed.

Shopping at KEH.com, you can shave another 40-60% off what I paid by getting a nearly-as-good N75, which Nikon released just as digital was largely beginning to replace 35mm in earnest. Rockwell describes it as “among the best 35mm cameras ever made”, but it's missing a few features I think I need, so I went for the N80. You can get a body from KEH for $23. There are used bodies on eBay for $20-30. The absolute bargain basement, which will still take amazing photos, would be an old early 90's consumer beast N6006 for $8, plus a Tamron or Sigma zoom for $15-25. If I was that poor, and did not already own some Nikon gear, I might get  a Canon camera instead; like, you can get a Rebel G for $8, or a heavier, older, more pro, EOS 650 for $16, and a comparable 28-80mm slow zoom for another $40—  probably a better camera than the N6006. But I don't think I would choose one system over another for the quality of their absolute dirt-cheapest used gear. And at a certain point, shaving a few more dollars off the cost of the camera becomes irrelevant; you still have to buy film, and get it processed.

In fact, that is the bigger financial obstacle to taking up film photography— processing and managing your images. It's not a big a deal, and it doesn't have to be expensive, but it is more laborious than digital. You just have to get your system together— we'll get into that another time.

And I do strongly encourage you to do your shopping at KEH.com (if not at a local independent camera store). I've found their “bargain” grade gear (which comes with a fairly dire-sounding description) to always be a legitimate bargain— the gear looks better than I expect, and has always been 100% functional, with no effect on image quality.
Todd Bishop at 10:45 AM
Share