Oh, what the hell, happy Saturnalia— I went ahead and transcribed the solo from the GOTD of a few days ago, Tarik, by Ed Blackwell, from Dewey Redman's album of the same name. It's a real study of hand independence, and not very readable, but at least roughing it out measure by measure or phrase by phrase should give you some insight into Blackwell's way of playing. At least into this tom tom thing of his, which you should recognize right away if you've heard much of his playing. The tune is basically just a drum groove, with Redman improvising freely on the musette, along with Malachi Favors on bass. Possibly the opening phrase on musette was composed. 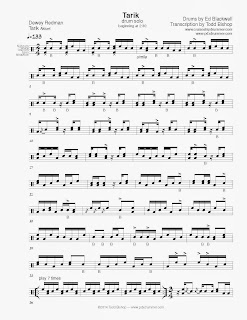 Throughout the piece, there are many times when the snare is played with both hands in unison, or nearly so, which I've indicated with a B. I included them based on the sound, and haven't worked through them on the drums prior to posting this, so if you hit anything really unplayable, probably one of those both-handed notes is in the wrong spot. Definitely write in your own additional stickings where needed. Blackwell basically plays quarter notes with both feet in unison all the way through, though often one or both may drop out for a few beats. It doesn't matter— the main thing is the hands. The repeated lick at measure 36 gets a little sloppy, and ends with an accidentally dropped beat, hence the single measure of 3/4.