The tour went quite well, by the way— the shows were all well attended, audiences were very appreciative, we got some good press, and we are well situated to expand our reach next year. And we actually turned a profit this year; the gigs paid well, and I sold all of the CDs I took with me— 60 of them, I think. This was my fourth trip to Europe leading my own group; the first one lost a lot of money, another one made a little money, and another roughly broke even.


There's a gallery of photos from the tour here, and our updates from the road are here. 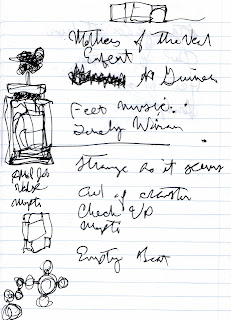 Earlier I posted the tunes I was including in our book— we ended up playing:
Mothers Of The Veil
Feet Music
Strange As It Seems
Enfant
Mob Job
Lonely Woman
Owl of Cranston
Guinea
Mopti
Empty Boat
Valse de Melody


Here's the group playing Mopti, by Don Cherry, at the Jazz Station in Brussels:

It's funny, this was the second gig of the tour, I was feeling pretty jetlagged, and felt that the group was under-rehearsed, and that we were kind of hacking out a performance; with a little distance from it, though, you forget what you were feeling, and what you were trying to do, and you can see the thing for the respectable performance it is. That's become one of my rules: the gig was always better than you think it was. I can't promise that holds for everyone at all times— it most certainly doesn't, in fact— but time and time again I have heard recordings from what I thought was a really off night, and they are inevitably totally fine, or even good.

So, now it falls on me to make a new record fast— which is how I like to do them— and get booking the November '14 tour in January/February... onward...