How to play Stablemates

The bop tune Stablemates, by Benny Golson, is something of a test piece for drummers. As now-Portland pianist George Colligan said, “Stablemates can be revealing for a drummer….”, and Golson himself said “It moves around quite a bit.” Indeed. Despite the instantly-digable melody, it's very easy to get lost, and avoiding that for a drummer can involve some psychological trickery.

It's a medium swing tune, and the form is ABA, with 14-bar A sections— 10 bars swing + 4 bars Latin— and an 8 bar bridge. There are stops on the 10th bar of the A sections, and at the end of the bridge. The stops and the Latin feel are not normally played during the solos. The tune is played one time only before the solos, and at the end of the whole piece. In the pdf I've given some kicks which are played on the Benny Golson recording, but which are not usually played at sessions today. 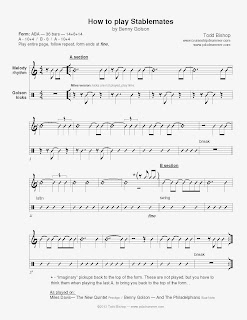 I've found, through bitter experience, that there are two major pitfalls: the first 10 bars of the A sections, and making it back to the top of the form:


The A sections
The 10-bar swing portion is the hard part— despite how it looks on the page, the it doesn't break down to an easy 8+2. If anything, it's a weak 5+5. Maybe. You could manage it just by the brute-force counting, but to me that's the worst way to approach a piece of music; and I believe it will fail you sooner or later.

Intuitively following the melody, which meanders in ways that can trick you into adding or cutting measures, can also get you into trouble, but that is my preferred way of handling it. To do that, you just have to know the line well. Learning Golson's kicks will give you something more to hang onto, even though they are not often played at sessions. You can also count through the section (1234, 2234, 3234-style), and get used to corresponding the measure numbers and melodic elements.


The end of the form
The problem here is that it's not easy to hear two A sections in a row. Hearing one ABA is easy— especially the AB part— but hearing ABA/ABA/ABA isn't. So what happens is, when you're going into the second chorus of your solo, you accidentally internally hear the beginning of ABAB, and— zip, WHOOSH!— you're already dead. You try to figure out where you would've been if you hadn't just screwed up, fail, and finally give up, hoping that the band is lost, too, and that you can cue them out of your solo sometime that could plausibly be the top of the form, as far as they know. It's a drama that is played out countless times every year.

The problem is that the A sections have pickups which we are not used to also hearing the end of the form— they aren't played as a normal part of the tune. Where they would occur, you are either going into the solos, or ending the piece. This is a problem when you are primarily playing off of your internal sense of the melody, so you have to practice hearing those pickups. You can do that by playing time, or soloing, singing the tune yourself as you play a whole lot of A sections in a row. There's a little video after the break which may help with this. Once you have that together, you will just have to have the presence of mind to know whether you are going into the bridge, or back to the top of the form.

A lead sheet, and audio after the break:


Here is the Miles Davis version of the tune, edited to just repeat the A section, so you can practice going from the last A to the first A:

This version by Benny Golson has some hits which I don't believe I've ever heard played on a gig— certainly knowing them you would have a better knowledge of the tune than most musicians: