I guess the 80's is vintage now. In the past few years I've been rebuilding my cymbal collection, after ruthlessly disposing of a lot of things during a lean patch, and have largely been focusing on older Paistes. After years of listening to Billy Higgins, Jon Christensen, Paul Motian, Al Foster, and ECM recordings in general, much of the sound in my head calls for them. And, as I've written before, I've also been on a clarity kick for several years, and the 602 and Sound Creation cymbals definitely fulfill that. The thin, warm, dark, lush, pretty-sounding, quiet cymbals jazz drummers have been favoring of late, while great for recording, I've felt have led to stage volume issues— mainly, a death-spiral of quietness— as well as being-heard-by-the-audience issues. I'm still generally playing these heavier cymbals quietly, but there is enough sound here to keep players from weirding out at their own finger noise competing volume-wise with the actual music. I believe a pianissimo on these cymbals gives you a true stage pp, which is louder than a practice room pp, where your ear is a couple of feet from the instrument.

That's the back story. These tend to be expensive cymbals, but through some very patient, unemotional shopping I've been able to get them very reasonably— for about half the expected price, actually. Here they are: 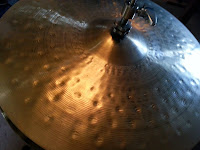 The sound here is dark and fairly complex, but these are very powerful cymbals, and high-pitched, the loudest hihats I've ever owned. The wavy sound edge bottom cymbal gives a very crisp, cutting foot sound. One of our local jazz guys, Ron Steen, has been using these exact cymbals and sounding great with them for years, in all settings— dinner music, vocalists, and everything. Players used to stomping on their hihat pedal would have trouble using these when any kind of delicacy is required; I've found it relaxes my whole physical set to just be able to step on the pedal and have the cymbals speak. They don't sound especially pretty by themselves from the playing position, but they blend nicely with the entire drumset, and with the rest of the ensemble. 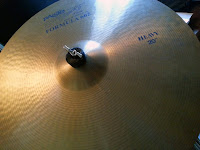 I've been proceeding on the assumption that there are no bad 602s, and haven't been much disappointed so far. I saw Art Blakey playing what I guessed was a 22" heavy 602 back in 1985— his ride cymbal was extremely cutting. I don't feel this cymbal fits that profile at all; it's not overpowering or especially bright, despite its weight, which actually seems to have a dampening effect. It has that very refined 602 sound, and is not too bright. It is difficult to get a clean crash out of it, which I suppose you would normally expect, except that I can get that out of my 22" Dark Rides, which are not any thinner than this. Here the crash is long, without much of a peak, and you don't get much volume. It's obviously not a quiet cymbal, but it's not really a high-volume one, either; you could hurt yourself and the cymbal trying to play it really loudly. It would probably make a beautiful sizzle cymbal, but I'm going to take a break from drilling things for the moment.

I don't know the weight in grams— maybe around 2700-2800. Close to the weight of an A. Zildjian Ping Ride, but without that model's offensive qualities. 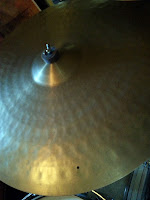 With the acquisition of a second one of these monsters— the other being a very early 22" 602 Dark Ride— I guess I'm officially an “SCDR” guy. Certainly Paul Motian's statement that “I’ve got a few of those…” has been working on my mind. I got a very good deal on this, mainly due to the fact that it has been played a lot; the top logo is worn away, there is a keyhole that appears to have been professionally drilled, and one minor nick in the edge. Plus cymbals drilled for rivets tend to sell a lot cheaper than “virgin” ones. People are silly that way. This is a creative tool to me, not a decoration or a vanity item, and I don't give a crap about any that stuff, so I was able to pick it up for about half of the normal low-end cost for this model.

This is the New Dimension model, and I don't know how those are distinct from the regular SCs— it's an addition to the line they introduced in the 80's. There are several iterations of 22" darks at cymbal smith Matt Bettis's site, and while he notes differences, he doesn't seem to particularly value one line (602, transitional, SC, SCND) over another. Compared to my 602 Dark, the ND is darker sounding, lower pitched, and more complex, with a fatter, gong-like overtone cushion. There's a fairly pronounced shoulder built in to the cymbals profile, which gives some distinctly different-sounding playing zones— you can draw a lot of sounds out of it. Like the 602, it is capable of producing a fast, explosive crash. It's rather an intimidating cymbal— when you first sit down with it, it feels like driving a large, 70's-vintage Cadillac. It handles like a boat at first, and you definitely have to find the right touch for it.

These Dark Rides were created by Paiste in partnership with Jack Dejohnette, and I wonder if the sound he was going for was not that of Jon Christensen's famous, heavy 22" K— it seems likely they crossed paths a fair amount in Europe in the early 70's— at least they were both being produced by Manfred Eicher a lot. It's remarkable how well the Sound Creations— heavy cymbals— handle in all sorts of situations. There's a lot of hype about them; maybe it's justified, and/or being what they are, maybe I give them a chance in settings where I would normally use something lighter.

By the way, if I've talked you into spending a lot of money on these types of cymbals— well, first think twice about it; they can be very challenging cymbals to work with— and then reread my tips on buying used cymbals online, then visit the following page by Zenstat, a moderator at the Cymbalholics forum who has compiled eBay sales statistics for Paiste 602 and Sound Creation cymbals from 2006-present. That should give you a ballpark idea of what you can expect to spend, keeping in mind that used prices are trending precipitously downward from the high points in his stats right now.
Todd Bishop at 11:37 AM
Share