Here we have a Latin percussionist funking out a little bit on Caminando, a hip cha cha* recorded by Eddie Palmieri on his great album Vamonos Pa'l Monte. The drummer, Raymond “Monchito” Muñoz, brings very much a percussionist's sensibility to the drumset; almost the entire track is played on the hihat alone, with little variation, and with very sparing use of the bass drum and snare drum. The funky parts happen at the end of the first interlude, and on the outro.

There is little information about Muñoz online, and I had never heard of him before. From what I gather, he is a Puerto Rican percussionist active in New York and PR since the 60's, or earlier. Apparently he studied with Henry Adler. From his Facebook page, it appears that he was seriously ill recently. 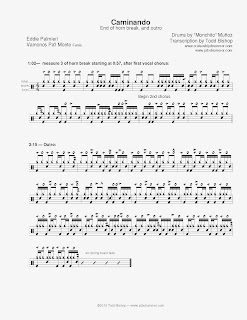 It seens that Muñoz's primary instrument is timbales, and he plays the drumset with what I imagine to be a timbalero's touch— for whatever that observation is worth. He draws a variety of sounds out of the snare drum (and hihats, to a lesser degree), playing loosely and not very loud, blending volume of the drumset with the congas. You never get the feeling that he's playing into the drums, the way many funk drummers do. I would be tempted to approach this by just learning and playing each measure— or group of two measures— as a groove in its own right.

* — If you're better than me at IDing salsa styles, please let us know in the comments.