Lately I've been whittling away at my ignorance of Afro-Cuban/Salsa drumming, and here we'll look at Guaguancó (say wah-wahn-CO), or Rumba Guaguancó, a very distinctive and popular style I first became acquainted with via a great drummer named Jeff Falcone back in 1989, when I was a student at the University of Southern California. As it normally happens in the US, I learned the thing very one-dimensionally: just as an isolated beat. But I think the one groove : one full page format we used with the Page of Mozambique is a better first state for the Latin styles, and we'll do that again here. 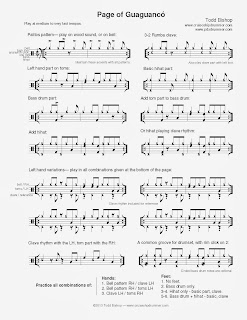 A few things to know about the style:

Learn each two measure pattern, and play it along with a moderate-tempo recording— the first one after the break, by Carlos Embale, would be good. Since the clave orientation can be tricky, also play just the clave rhythm along with the recording, and pay attention to how it interacts with the drum melody. When you are generally familiar with the pattern, proceed to doing a longer workout, as described at the bottom of the page of exercises, using all combinations of hand and feet parts. As always, learning the version with the clave in the left foot is the lowest priority.

Several audio examples after the break:


Carlos Embale is the major guy I have come across doing the music in its traditional form, here using just voices and percussion— three conga players, palitos, and shekere.

By a commercial band:


Here's a strange example from Cal Tjader and Eddie Palmieri: it has that Guaguancó melody in the congas, but it's backwards from the palitos pattern (played on the shell of a timbale) and clave (played on a small cowbell). The congas have a 3-2 orientation, but the palitos/clave are 2-3; they're also using Son clave. See if you can pick all of that out: