How to play Jordu

About time I did another one of these: here's Jordu, by Clifford Brown, as played on the definitive recording, Clifford Brown & Max Roach, on EmArcy. It gets played a lot at the high school and college level, and at jam sessions, and it's an easy tune to play wrong.  Per our usual format, I've given here the recorded rhythm of the melody, along with a sketch of the drum part, along with a few notes. Print the pdf, find the lead sheet in your Real Book, listen to the recording, and proceed. 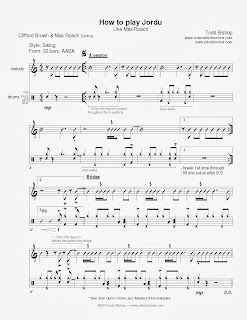 The major issue people have with this tune is how to handle the figures and stops on the A section. The standard thing done at jam sessions is to play the figure in measure 2, three times. But originally, that figure starts off the beat the first time, on the beat the second time, and off the beat again on the third time; and on the second time they aren't actually playing the figure at all— they just play a measure of time with a stop on the & of 4. People also tend to be unclear on what to do in measures 6 and 7— often they'll try to fit the previous figure in again. Max and the bassist just play time.

On measures 1-2 and 5-6 of the bridge Max plays a little set-up on the floor tom which might be a little hokey in modern playing. Listen closely to what's going on there, and see what you think about it, and how it works as an arrangement element. At the end of the bridge there is a bit of a subito mp as the horns do their pickups in to the last A, so you have to set that up gently.

Max fills with crescendoing 16th notes on the floor tom on the second ending, and on the last measure of the form before the solos.

Lead sheet and audio after the break:

Here's the Real Book lead sheet, which many students will be using. There are several rhythmic discrepancies with the original recording. The Berklee student who transcribed the chart in the early 70's put a little staccato 8th note at the end of measure 7 of every section, and on the first measure of the coda, which the rhythm section plays, but the horns do not— not on this recording, anyway. Also the rhythm on measures 3 and 7 of the bridge is wrong— see the pdf for the correct rhythm. 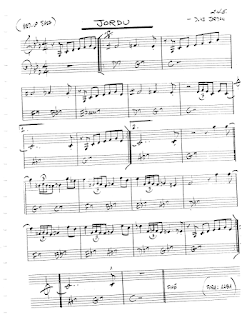 [2020 note: I had to update the image, and I think it's the
original Real Book chart but I don't feel like checking. So my
notes above may not be accurate for this exact chart.]

Here's a version recorded by Stan Getz, from the album Stan Meets Chet; the arrangement is similar to what gets played at jam sessions. On this recording the rhythm section plays the measure 2 figure three times on the A section, and  Getz plays the figure from the second ending throughout the bridge: