Let's really Dunlop out during this fundraising drive. Here's part 2 of yesterday's most— Frankie Dunlop's actual solo on Jackie-ing, from Thelonious Monk's Live In Stockholm 1961 album: 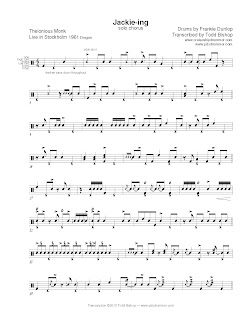 Note that he feathers the bass drum most of the way through the solo; written bass drum notes are mostly accents. If you've worked through any of my transcriptions, you'll notice that I don't tend to write accents on the toms— they're usually played strongly by default.

Once again, the solo has gone longer than a single chorus— almost by two full A sections; and the ending is sketchy— Monk effectively makes a measure of 2/4 coming in with the melody where he does. Dunlop seems to be simplifying at the end of the chorus (the last measures of page 1), but maybe his cue wasn't strong enough, or the band was thinking about something else, and they don't come back in with the head there. It gets a little ragged after that— the 1 gets a little ambiguous; maybe Dunlop was slightly flustered. He never wavers, though, and is right on it when Monk comes in in a place he probably didn't expect. People get nit-picky/embarrassed about this stuff, but it happens to the best of them.

This would be a good time to re-read Dunlop's comments on playing with Monk, culled from his old Modern Drummer interview.