Playing meter-within-meter— playing in one meter during a tune in a different one— is a very common rhythmic element in jazz, which became fully realized in drumming during the 1960's by Roy Haynes, Elvin Jones, and Tony Williams, among others. It's an essential element of modern playing, and, as I said one of my earlier posts on polyrhythms, it's not a show-offy effect or trick; it's just an ordinary part of the fabric of jazz rhythmic phrasing. It's not a fixed thing, but I see it as underlying much of what we play in a way not too dissimilar from clave in Cuban or Cuban-derived music. Most common is 3/4 (often with a strong 6/8 inflection) played within 4/4, and that's what we'll deal with here: 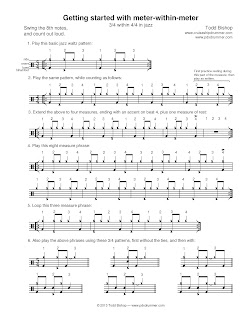 The methodology here is pretty straightforward: play the waltz figure in 3, then play it in the given phrases in 4, counting out loud the entire time. That last is very important: it's easy to get lost doing this type of playing, at first, and verbalizing the counting while practicing it will insure that that doesn't happen. The snare parts here are simple, but doing the standard tom moves will provide a little interest, and force you to concentrate a little harder. After you learn the phrases with the 3/4 patterns given here, you can try using your favorite patterns from any of the pages o' coordination in 3, or use your own patterns.

See The Art of Modern Jazz Drumming by Jack Dejohnette and Charlie Perry for more about this type of playing.