How to play Pent Up House

Or, how to play it the way it was played originally. What we'll do in this series is look at the definitive recorded versions of some commonly played jazz tunes, and nail down all the stuff a drummer should know to really know the thing. Pent Up House, by Sonny Rollins is an easy tune that gets played a lot at sessions, so much that it's easy to be lazy with it. I'm certain I've never looked at a chart while playing it, and have never listened to it with the goal of retaining all of the performance info about it.

Our format here is sort of a glorified drum chart/partial transcription, liberally doused with whatever verbal notes are necessary: 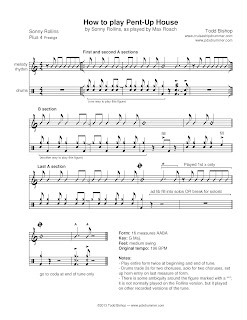 I've given a transcription of the rhythm of the melody of the tune, along with a sketch of the drum part, and some pieces of information you should know: the form, style, tempo, and— why not?— the key. It is recommended that you sit down with a lead sheet, the pdf, and the recording and give the thing a couple of listens (and plays) through. If you're not adept at playing from lead sheets, then this should help give you an idea of how to do that.

There will be questions at the end of the form, about the dotted quarter/8th note figure I've marked with an asterisk, and about the break leading into the solos. The dotted quarter figure is given in most fake books, but on the recording it is only played seemingly accidentally— pianist Richie Powell plays it once, then plays a variation on it, and then Max Roach plays it as part of his fill leading into the solos. The composer— Sonny— never plays it. The pre-solo break is usually played by the drums, but you should be aware that the first soloist may also come in there.


Here's another version of the tune, recorded by Chet Baker. Here the bass and drums just play the main figure, and play time through the stops. And the band does play our asterisk figure every time, as well.