This one goes out to my man Ed Pierce; I've really been getting into the Al Jackson this week. Here's most of what he plays on Soul Jam, by Booker T. and the MGs, from their And Now! album:

Oh, what the heck, let's do the whole thing. This may look like a chart, but it's an exact transcription of everything Jackson plays on the record: 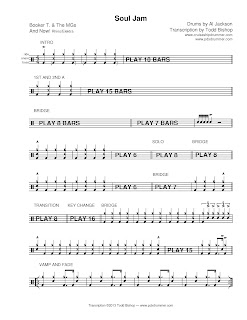 How do you build intensity without embellishing, changing parts, or significantly changing dynamics? It takes a lot of confidence, and trust in the music and the other musicians to play this minimally; there's really nothing here except the groove, a stop, a few punctuations, and a little set up for the ending vamp.

I've broken from convention and notated literally the swing rhythm on the vamp at the end— the jazz way of indicating swing 8ths doesn't seem entirely appropriate for R&B. I've used a dotted-8th/16th rhythm because he plays it a little closer to that feel than straight triplets, as you'll hear— Jackson's swing on the vamp is slightly more staccato than that of the rest of the band. But also note that the “skip” note on the bass drum is always solo; that note never lands in unison with any of the other parts.