Here's a nice introduction to rock in drumming in 7: Ralph Humphrey's part from Don't Eat The Yellow Snow, from Apostrophe by Frank Zappa. I go way back with this song, to 1974 when I was 7 and my brother brought the record home. I think this was the first thing I ever heard that it occurred to me to ask who it was who was playing it. 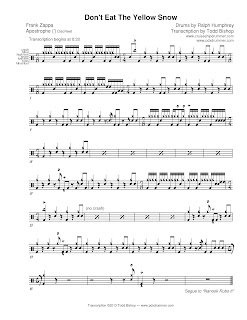 It's mostly in 7/4, with a few measures of 7/8. The 7/4 is a half-time feel, phrased as 2+2+3 quarter notes, and the 7/8 is a 16th note rock feel, and breaks down to 2+2+3 eighth notes. The feel change on top of the meter change may be a little confusing, but the underlying pulse is consistent between meters. It's tempting to try to explain it, but you can figure it out if you follow along with the recording a few times. Go ahead and count through the rests at the end— get a feel for how the 4/4 contrasts with the 7/4.