OK, I may be really blowing what's left of my credibility with you guys with this one, but I'll just have to live with that. This is a goofy little thing with a nice drum performance, by the Brazilian fusion band Azymuth. The fact is, I've learned to really love light music, and as I mentioned before, nobody does light like the Brazilians. I guess I've paid my dues through many years of listening to a lot of Cecil Taylor, Albert Ayler, late Coltrane, and all other manner of hard listening, and now I've also learned to appreciate things that effectively create a mood. Especially when they have big tom tom fills. 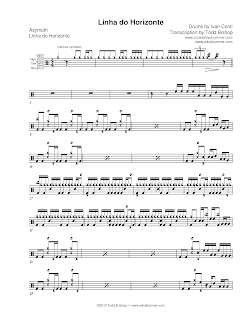 The drummer, Ivan Conti, has at least four toms tuned in pretty tight high and low groups. I've tried to put the fills on the correct drums, which can make them a little obscure to read. Which drums you play them on is not important; instead, go for timing and sound. He plays the fills at an even, strong volume. Like many of my favorite Brazilian drummers, he is a master of dynamics, so you'll often have to make a big jump in volume going into and out of the fills.

A couple of minor points: The occasional ghost notes on the snare (the ones in parentheses) are usually played as a rather sloppy double— you can feel free to leave them out, or add extra ones. Later in the tune, when there is a mixed rhythm on the hihat, accent the 8th notes strongly; the 16th notes happen essentially randomly, so don't get too hung up on getting the hihat part exactly right; he's playing mostly 8th notes, but is likely doing an arm motion for accented 16ths, and some extra notes are creeping in. You can just play running, accented 16ths, or plain 8th notes during that section if you want.

Audio after the break— you're going to love this one: