Well, it took long enough, but I finally have a name for the post-Elvin phase of this coordination series. I don't expect many people will follow me down this particular rabbit hole, but whatever. This is based on the groove for one particular Brazilian tune, “Baby”, by Caetano Veloso, as played by Gal Costa. There are plenty of bossa tunes in 3, but Americans don't seem to play them much; probably the only way I'll end up playing this particular one on a gig is if I put it in my own book.

But no matter. There is a special thing going on with the groove; there is a 4:3 polyrhythm is built into it, with the bass playing in 3 and the guitar in 4, and the percussion mixing it up between them. Maybe that's a common thing, and I just haven't heard enough Brazilian music in 3. There's actually very little drums on the recording, so I put together some parts that seem to work, and are reasonably correct. 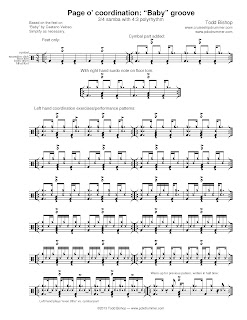 The left hand parts are meant to be quasi-functional. I think there's enough activity here to do these without the tom moves, but if you want to go crazy with this— crazier— I can't stop you. If you need more action, I would try experimenting with the tonality on the bass drum, playing the 1 and the 3 as dead strokes, and 2 as an open sound. Note that the e of 3 is accented in the percussion on the recording— do what you will with that information.

More likely you will need to simplify. At first, try losing a) the right hand floor tom note on 2, b) the accent/hihat splash on 2, c) the left foot altogether. Or just play your left foot in unison with the bass drum. Don't freak out when you get to the last line; take it slow, and apply what you know about the dotted 16th/32nd rhythm. I've also written that pattern in half time, so if you need to, you can use that to get the coordination together.

Obviously, on the real tune the feel is very delicate, and sparse. Learning these by playing them with the 1969 recording of the tune by Gal Costa will help keep this a musical study and not just a goofy coordination workout.

Here's a version that actually has some drums on it, and you can hear that he puts the accent on 1. They end up mostly abandoning the 3 of the 4:3, and just play a triplet feel in 4, which a lot of people seem to do. I guess that's a page o' coordination for another day...