Much more on the Baby groove

Here's more than you ever wanted to know about a song you never heard until a few days ago, “Baby” by Caetano Veloso. It's not exactly the most important thing ever, but it's on my mind right now, and it's interesting because it's written in 3/4, and performed with a built-in 4:3 polyrhythm. And we don't see enough Brazilian tunes in 3 to know what to do with them when they come up.

With this song, there is a built-in tension between feeling it this way:

...that is, in 3/4 with a superimposed 4 in the guitar/keyboards/higher-pitched percussion, vs. feeling it this way:

...as a triplet feel in 4, with the 3 in the bass drum/bass line. In the recording from the “page o' coordination” the two are pretty evenly balanced, but as we'll see in a moment, they aren't always.

First, here is a lead sheet for the song— I suggest following along with it while listening through the original Gal Costa recording: 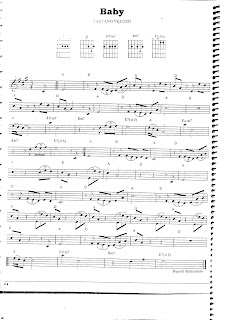 Much more after the break:


Here is a recording by Veloso with the psychedelic group Os Mutantes. Our song starts at 2:59:


The drum groove here seems to be a fairly standard way of playing the song. The notes in parentheses are optional:

Next, by Bebel Gilberto:


A similar groove is used on the verses:

The bass line is unusual; it's two measures long, with the 3 feel in the first measure, and the 4 feel in the second:

This version by Gilberto is the first recording I ever heard of this song, and it is still my favorite— it's basically a perfect track. I think Chick Corea's light as a feather phrase is a perfect description of a major quality of Brazilian music, including the lyrics. On hearing the English translation, it would be easy to dismiss the words as insipid, but they work perfectly on the level they are supposed to, even if most “serious” musician listeners don't want to go where they take you.  The drum groove is the same as the other version— it may even be the same recorded track:

The agogo bell part is interesting:

But it's very difficult to count it that way; it wants to be in its native 4/4:

On this television performance from 1998, with both Veloso and Costa, the tune is played more or less as a straight funk samba in 3/4:

As appears to be the standard, the bass drum and bassist outline the 3, and the guitar and keyboards superimpose the 4 in dotted quarter notes:

There's also a repinique section playing this rhythm, nailing the overall groove firmly to the 3/4:

Another TV recording, from 2002, by Gal Costa, is closely based on that original arrangement from her 1969 record:

The drummer plays a modern, funk-type drum groove, with brushes on the snare. Here the parts are inverted from what we've seen so far: the hands play the 3 and the bass drum suggests the 4.


This is felt strongly as a straight triplet feel in 4— Veloso even phrases the melody that way— obviously it was easier to do it that way while playing the guitar. The only one doing the 4:3 rhythm is the drummer, who plays half note triplets on the bass drum during the early part of the song: