Received this in my email without comment from Portland drummer Ron Steen. Ron is an accomplished jazz musician, and has been running jam sessions locally for decades now, and has been the first gatekeeper encountered by many, many young would-be jazz drummers in the region, myself included.

I'm not sure if this went out to his entire mailing list, or if he's trying to tell me something: 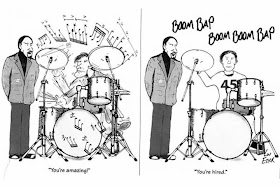 The thing illustrated here is never far from the mind of anyone who has spend more than a couple of years in the field, though as the professional situation has gone full rust-belt in recent years, you get the impression that a younger generation of players is less aware of it. For them, there's nothing to be hired for, so all they're left with is: 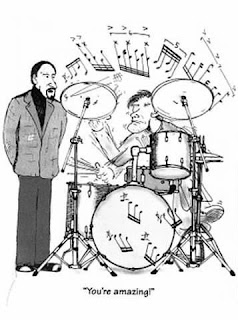 End of story. I think the amazingness problem is worse out in drummer-land than it is among jazz players— most of the under-30ish jazz guys I know are taking advantage of the freedom of unemployment the same way I did, by making “artists” out of themselves. But I also paid a decade of dues living on a boat, playing 30's tunes, among other things, and I think these players would be better off if they did some of that, too— you can hear its absence in their playing.

To be clear, nothing we do on this blog is about being amazing, or about working on complicated things because we like being fascinated by them. On the whole I think we do a good job of keeping things real.
Todd Bishop at 11:56 AM
Share