Let's start out the new year with a more substantial transcription than we've done in a while, in this case a very famous drum solo by Elvin Jones, on Summertime from John Coltrane's My Favorite Things. This is one of those things that everybody transcribes at some point— you can check out Steve Korn's site for his transcription and analysis, and there are probably other examples on line. 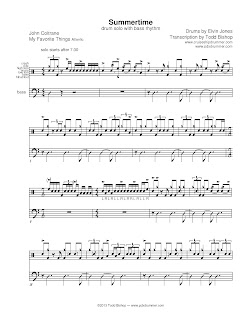 The bass (and some piano) plays through the solo, and I've included its rhythm so you can see what Elvin is playing off of. The 7/8 bar on page one is a mistake— he drops half a beat on that break.

[2017 UPDATE: On proofing my transcription for the e-book release, I discovered that the mistake was, of course, mine— that particular break is just extremely oddly-phrased, and difficult to follow. The band is a little rough coming in off that break, so at least I'm not the only jerk in the world who had trouble with it.]

He does play more hihat than I include, but much of it is very soft and seems to be non-intentional. A few things look a little strange on paper— in those instances you can defer to the recording, and do your best to duplicate the sound of the passage.