This is a way of playing 4-Way Coordination, by Marvin Dahlgren & Elliot Fine, which I've been using while playing along with Jan Garbarek's Dansere, and Gary Burton's Mevlevia— most of 4WC is just too dry for me to use by itself. This is essentially the same simple method of adding quarter notes, which we used in putting Stick Control into 5/4. Since there's a small twist, and the source material is more demanding, I thought I'd better write it out. I've been using it with the difficult “harmonic” coordination section of the book, on p. 15, but you can apply it to most of the book. 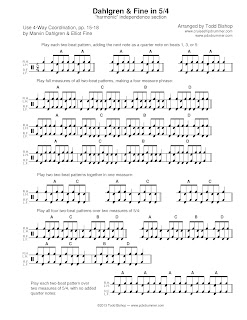 We make a 5/4 measure out of the originals 4/4 patterns by adding a quarter note on either beat 1, 3, or 5. The quarter notes are played with whatever limbs were coming next in the pattern— take a look at the pdf, along with the explanation after the break if the meaning isn't clear. By introducing a little stop, and not breaking sequence, this actually makes it easier to learn these exercises in 4/4. I highly recommend practicing these along with music— by placing these very technical exercises in context, you may stand a chance of actually being able to use them musically.

Explanation and source examples from 4-Way Coordination after the break:

Each exercise in this section of the book consists of one measure on two staves, with four related two-beat patterns. Here's the first measure of p. 15: 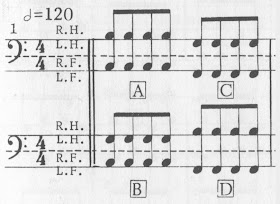 We'll be using this as follows (note that each shorthand measure below will have an added quarter note):


The exercises in the pdf are derived from the third measure of the first line on the page: 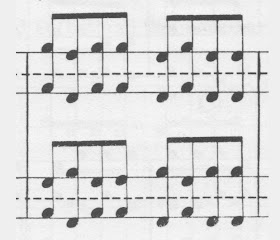 It will end up taking a fair amount of time to get through just one of these blocks of patterns, but there's really no fast way of getting through Dahgren & Fine. It's never going to be anything but a slog.