Another Milton Banana transcription, this time the batucada-style intro to O Samba Da Minha Terra, from the same Sambas De Bossa album as last time. We'll probably be seeing more of these, because I really like listening to Banana's playing, and transcribing really makes you listen closely. 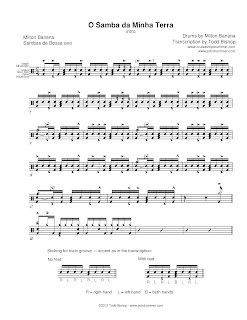 I've isolated the main groove at the bottom of the page, with my best guess at a sticking for it. It's a little awkward, with the three lefts in a row around beat 2, but it seems to be the most practical option given the accents— at one point or another there are snare drum accents everywhere but on the second or third notes of the three lefts. It's possible (likely?) he's doing something else, maybe a non-obvious sticking that facilitates the feel, and/or possibly using a unique sticking for each of the three or four different things that happen here. An easy solution to all of this would be to eliminate the left hand on beat 2, and do the entire pattern with an alternating sticking— that's the most common way of making this feel.

This would be a good time to revisit my posts on samba feel— I'd direct you to someone more authoritative, but none of those people seem to be writing about this on the Internet— while giving this a close listen. Here Banana plays a moderately swingy “tripteenth” feel (which basically squishes the four 16th notes into the space of the first and last notes of the triplet); the triplet pull is not extremely strong, but  he's obviously not playing even 16ths, either.