Speaking of the record: being from the Pacific Northwest, I've never felt we projected any kind of cultural identity to the rest of the world. Even within the region all we ever had to latch onto were Prefontaine, Henry Weinhard's beer, Nirvana, and Drugstore Cowboy. Usually when I'd go overseas if people knew where Oregon was, all they would know about it is that “it's rainy.”

So I was kind of happy to actually be able to live up to a stereotype when we were performing in Europe in November. A friend of one of our Brussels musicians, who was familiar with Portlandia, heard where I was from, and was getting a kick out of quoting this to me all evening:

It took me a little while to remember my own merch: 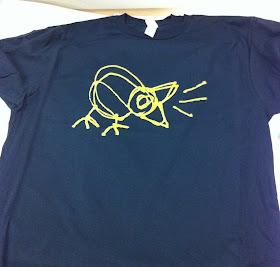