I don't know where I'm going with this idea, but what the hell, if a blog isn't the place to throw up whatever half-baked junk you happen to be fiddling with at the moment...

Here I've applied a basic three-part sticking of R-L-B (B = both hands) to a few rhythms from Syncopation: 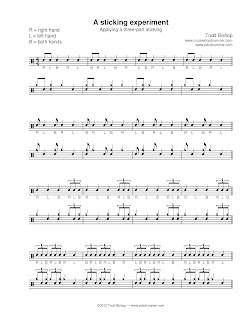 My initial idea was that this could be another variety of Reed interpretation, to be applied on the fly, but that seems pointlessly difficult, and not really anything to do with a needed real-world musical skill. Probably a better use for the idea is to use it to generate some materials which would be completely written out, like the second line of each pair above. The goal would be to run some essential coordination idea through some rhythmic permutations in perhaps a more interesting way than the familiar “tables of time” approach. There seems to be a lot of potential in the idea when you include the four limbs, and the combinations of limbs, in the stickings. We'll see.

Get the pdf, if for some reason you want it.
Todd Bishop at 10:15 AM
Share