As I mentioned before Milton Banana is one of the great Bossa Nova drummers, and since that tends to be an under-understood style (by the whole rhythm section, actually), I want to go a little bit deeper into what's happening with his playing. So here's a transcription the head of the tune Flor de Liz, from his 1984 album, Sambas de Bossa (originally titled Linha de Passe): 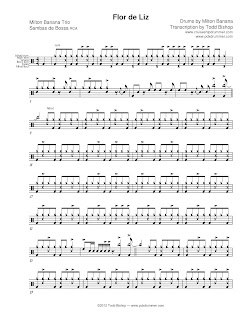 The first note of the piece— the pickup on 4 with the bass drum— is very commonly used for setting up the beginning of a tune or a new section after a stop. For the body of the tune he uses the partido alto pattern on the snare drum, with the quarter notes in the middle (often it's played with the measures reversed):

The accents that occur on the cymbal later in the tune are approximate; they are not exactly even in sound or in volume— you could play them on the cymbal near the bell, and different places on the bell itself. Also notice that the ensemble figures are very clean; he gives himself a little stop before them, and reenters with the groove on beat 2 after the hits on the & of 4 (as in measure 9). The fills at measures 26 and 49 are basically the same, except he pushes the first one a little faster, so it ends ahead of beat 3 slightly.


Get Sambas de Bossa by Milton Banana.
Todd Bishop at 9:36 AM
Share